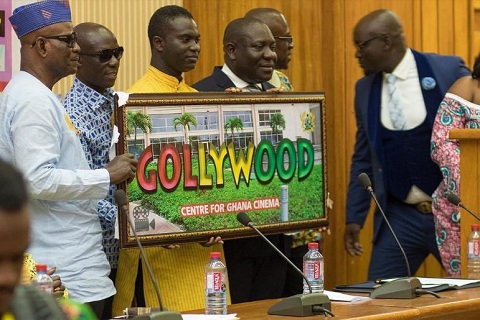 In 2014, I was to organise a conference for film industry in Kumasi, as the P.R.O an organiser for the film producers association of Ghana.

There was an association called film directors guild of Ghana, whose idea was conceived on a staircase at Adum. The first person I called to share the idea of the formation of this directors association was Isaiah Kofi Appiah.

To make the conference have a good representation from all other regions, I called a friend called Kofi Yeboah, he was busy and recommended a guy, whom I didn’t know and haven’t heard off before to represent directors from Accra.

That guy is called Richard Boateng. Based on the trust I had in Kofi Yeboah, I called this Richard guy to come to Kumasi, after I had arranged a meeting at the world Bank office here in Accra, as a pre-conference discussions.

His bills were all paid because he had nothing on him to even pay for transportation . He went to Kumasi, saw how organised the fdgg was, and released it was not registered but strong, came back to Accra, and registered it with this same Kofi Yeboah, in their names.

This is the curse I have brought on the film industry.

Today this guy is going around in hallucinated vision of being the authority for this industry? He says he has named our struggling industry as Gollywood? Such moonshine!?

A little check on the internet could have saved him from such blatant exhibition of cockamamie and doofusness. Mr India, since you luck research basics , and yet were given tax payers money to conduct some nonsense called research in Volta region, let me introduce you to GOLLYWOOD. PRIDE INDEED COMES BEFORE DESTRUCTION!!

Gujarati cinema, informally referred to as Dhollywood or Gollywood, is the Gujarati language film industry. It is one of the major regional and vernacular film industries of the cinema of India, having produced more than one thousand films since its inception. During the silent film era, many individuals in the industry were Gujaratis.

The language-associated industry dates back to 1932, when the first Gujarati talkie, Narsinh Mehta, was released. Until the independence of India in 1947, only twelve Gujarati films were produced. There was a spurt in film production in the 1940s focused on saint, sati[A] or dacoit stories as well as mythology and folktales.

In 1950s–1960s, the trend continued with the addition of films on literary works. In the 1970s, the Government of Gujarat announced a tax exemption and subsidies which resulted in an increase in the number of films, but the quality declined.

Bollywood, the sobriquet for the Hindi language film industry based in Mumbai (then called Bombay), inspired the nickname Dhollywood for the Gujarati film industry due to its profuse use of the dhol, a double-headed drum. It is also referred to as Gollywood, a portmanteau derived from Gujarat and Bollywood. (Source; Wikipedia)

And this doofus just came back from India with taxpayers money? So sad!