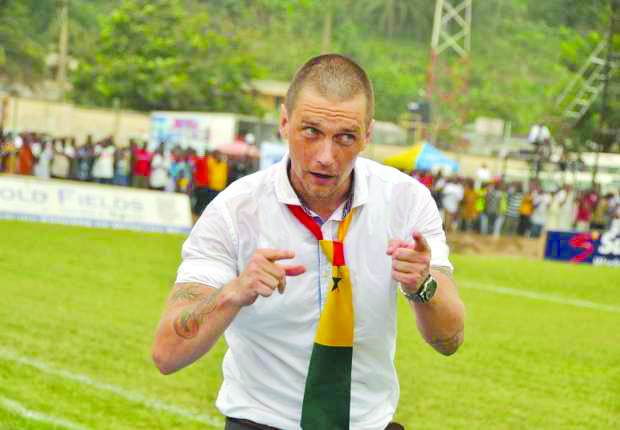 Global Village Media Group, the largest shareholders of Accra Great Olympics is considering the appointment of a top notch coach to head the technical department of the club in their bid to rescue their season.

Represented by the Fattal brothers – Talal and Fadi, the group is proposing the appointment of Swedish trainer, Tom Marcus Christian Strand, who is conversant with the Ghanaian terrain, to take over from Player/Coach, Godwin Attram.

But the move follows a period of dialogue with stakeholders of the club including players, supporters, other shareholders and directors and other identifiable groupings in the club.

In a five-point plan, the Group identified the areas of coaching, recruitment, transportation, motivation and sponsorship drives as areas that need critical attention.

The Group hopes to kick the plan into action by appointing Strand who is expected to breathe a new lease of life into the team with a revitalized technical direction.

With his appointment, Attram would act as Assistant Coach/ player.

Tom Strand, as he is known on the local scene, is a 36-year old Swedish trainer and holds a UEFA License A Diploma in coaching.

He comes with a wealth of experience with considerable honours to his credit; he won the 2015 MTN FA Cup with Medeama SC and was awarded the Best Coach of the same tournament. Strand was also the Head Coach of Bechem United during the 2013/14 season and was instrumental in bringing the club from relegation to finish the season in fifth position.

“Coach Strand possesses special qualities for player development. He groomed Augustine Okrah to become the Most Valuable Player (MVP) and GPL goal king, with the player becoming the most expensive player in Ghana transferred on loan to a foreign club.”

In strengthening the midfield and attacking areas of the team, the Global Village Group said the technical team has been tasked to organise a special screening justifier for professional players, mainly Strikers and Offensive mid-fielders.

The exercise, it said, will come off next Wednesday, March 29 at the St. Thomas Aquinas School Park at 10am prompt.

This is a prelude to the opening of the transfer window which will open from week 11 of the GPL.

The Group said a refurbished 42-seater bus branded in the Club’s colors will be provided to facilitate the smooth commuting of players and officials to competitive league centres.

And in collaboration with Melcom Ghana Limited, the club will also roll out a special sponsorship package that will see each player making the 18-man match day squad receive cash winning bonuses from the club in addition to free shopping vouchers for every win.

“We are pleased to also state that there are other potential sponsors who have given us their word to come on board if the team is able to attain 20 points or more at the end of the first round of the League,” according to the roadmap.

The club would also hold a special gala dinner night with the main objective of raising sponsorship and funds for the club ahead of the GPL second round.