Owusu Bempah you are a FALSE PROPHET – Rev. Prince Aidoo 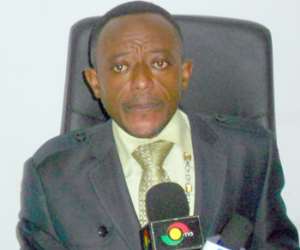 Here he goes again: Owusu Bempah said–“I don’t hate John Mahama and he knows that, but he has been rejected by the Almighty God.” “I have advised him and if he takes my advice it will help a lot. Mahama didn’t have any spiritual backing from God hence his failure to impress Ghanaians during his presidency. ”Mahama is a nice person but I have advised him not to contest for re-elections in 2020 because there is no way he would be elected as President of the republic of Ghana again.” (End of quote).

Who is he Owusu Bempah to say that, God has rejected Ex. President John Mahama?

Was it not the same false prophet who said in 2015 that, 6 (Six) personalities including the Ex. President John Mahama and the then-presidential candidate for NPP Nana Akufo Addo among others were going to die before the end of 2016?

These are the deeds of false prophets as the Bible has already said that: “For their fruits, je shall know them”. Which did God reveal such a false prophesy to Owusu Bempah? He should be ashamed of himself. He is just a hypocritical liar. Sorry for those innocent people who are still following him. He is one of the Devil’s agents in Ghana. He is sadly leading his followers into destruction.

I say therefore that, God has already rejected him Owusu Bempah for claiming that, God has rejected Ex. President John Mahama and he know it. God shall deal with him at the right time. God will not forsake all those false prophets and preachers in Ghana who are claiming on daily basis, that they are prophesying in God’s Name. This is what Jeremiah has to say in:

Jeremiah 14:14 “Then the LORD said to me, “The prophets are prophesying lies in my Name. I have not sent them or appointed them or spoken to them. They are prophesying to you false visions, divinations, idolatries and the delusions of their own minds.15 Therefore this is what the LORD says about the prophets who are prophesying in my name: I did not send them”. (End of quote).

When I am done with Owusu Bempah, I will deal with other such false teachers and prophets in Ghana. The country is suffering under spiritual attacks because its people are following false prophecies. They have unknowingly submitted themselves to false teachings. Through the false demonic doctrines of these prophets, these innocent people indirectly end up worshiping evil spirits whiles the “The Christian Council” sits and stir. The many accidents, the bloodshed and the development problems facing the country since decades are a clear testimony to what the Devil is doing in the country through his agents. Do the leaders of the “Christian Council” have any spiritual eyes to see what is happening to Ghanaians? Do they even care?

Today, the same Owusu Bempah again has presented a „Horn“ of an animal to President Akufo Addo to use it as his spiritual protection. Where did this “Horn” came from? Is this truly from God, or it is from his own evil forces?

I say therefore that, President Akufo Addo has submitted his dignity to the evil spirits by accepting this evil gift. If the President will continue to process this “Horn”, the end result will be manifested as the time goes on in his leadership. I am not predicting this to happen to him. The Bible says: “Let those who have ears hear”.

The Bible has made it clear in 1 Timothy 4:1-3 that: “The Spirit clearly says that in later times some will abandon the faith and follow deceiving spirits and things taught by demons”. (End of quote).

This tells you that, this “Horn” is not from God. The President has turned his back to accept deceiving spirits and this might have some effect on his leadership unless he realises it later and gives it back to Owusu Bempah, or destroy it. The President should know that he can’t serve 2 (two) masters and be free.

Fellow countrymen, I, therefore, say on authority that, the image of the President will be at stake if he continues to follow the doctrines and prophecies of this false prophet Owusu Bempah. I leave this to your judgement.