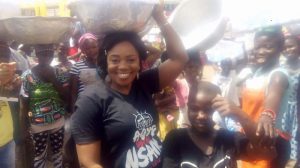 A new picture of Sensational Gospel artiste, Piesie Esther, selling sachet water in the market, has taken social media by storm and fans have begun to ask loads of questions as to what has gone wrong?

In the picture, is the musician carrying a pan with a young girl standing close to her in the market.

The main reasons surrounding the picture are unknown to some fans who aren’t friends of the musician on social media but have seen the picture circulating on the various social media platforms with different captions.

Others are of the view that, the musician now sells sachet water, as some fans of hers have captioned it on their timeline. But hold on!

The picture was actually uploaded by Piesie Esther on all her social media platforms and she expressed how fulfilling it was for her to help an admirer sell all her sachet water in the market, during a radio interview she had with Accra FM at Madina Market.

“So today at Madina Market during my interview with Nana Romeo of Accra 100.5FM, this little kid fan of mine here, who sells pure water walked close to me, and told me she loves me so much. I got touched and I helped her sell all her water at the market. What A Mighty God We Serve!!!” Piesie Esther captioned on facebook.