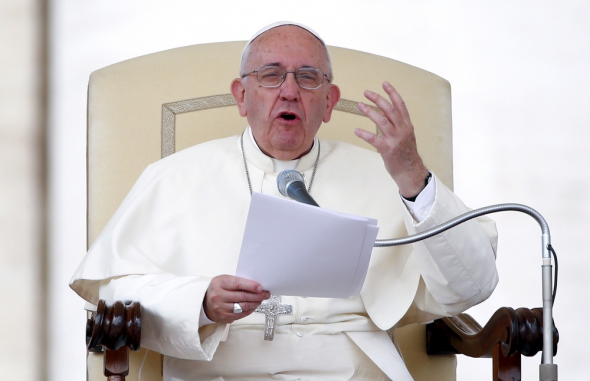 Pope Francis delivered a sermon on Hell and Satan Friday morning, warning Christians not to communicate with the devil, and said that eternal damnation is not a “torture chamber” as is sometimes envisioned.

“He is a liar and what’s more is the father of lies, he generates lies and is a trickster. He makes you believe that if you eat this apple you will be like a God. He sells it to you like this and you buy it and in the end he tricks you, deceives you and ruins your life,” Francis said of the devil, as reported by Vatican Radio.

FREE SIGN UP CP NEWSLETTER!
Pope Francis: Welcoming Refugees Into Your Homes ‘Is Our Greatest Security Against Terrorism’
The pope reminded the faithful of Jesus’ warning to never converse with the devil.

Reading from the book of Revelation, the Roman Catholic Church leader talked about what the Bible describes as the “second death,” or being thrown into the “pool of fire.”

“Eternal damnation is not a torture chamber. That’s a description of this second death: it is a death. And those who will not be received in the Kingdom of God, it’s because they have not drawn close to the Lord,” Francis said.

“These are the people who journeyed along their own path, distancing themselves from the Lord and passing in front of the Lord but then choosing to walk away from Him. Eternal damnation is continually distancing oneself from God. It is the worst pain, an unsatisfied heart, a heart that was created to find God but which, out of arrogance and self-confidence, distances itself from God.”

He said, however, that hope lies within turning to and encountering Jesus Christ.

Francis talked more about the subject earlier in November, and said that those who are faithful to God need not be afraid when death comes, as they will be assured that God is with them.

“If each of us is faithful to the Lord, when death comes, we will say ‘Come, Sister Death,’ like St. Francis. It won’t frighten us,” the pontiff said on Nov. 22 during morning Mass in the Domus Sanctae Marthae, according to Catholic News Service.

“When Judgment Day comes we will look at the Lord (and say), ‘Lord I have many sins, but I tried to be faithful.’ And the Lord is good” because He has given everyone this counsel: “Remain faithful until death, and I will give you the crown of life,” Francis added.