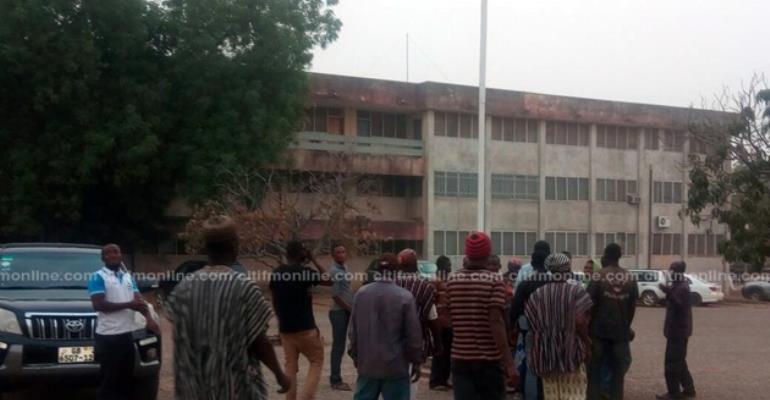 The five, according to Citi News sources at the Command were sent to the police station by the Upper West Regional Minister, Sulemana Alhassan, at about 1:00pm today [Thursday] February 1, 2018.

They include Bongaawmini Issahaku, Abdullah Hakim, Nuhu Suglo,Seidu Salifu and Osman Kamal, who is reported to be the leader of the group.

He said the police are on a manhunt for some other individuals who played various roles in the attack that left the NADMO Director’s aide seriously injured as he was beaten to pulp.

This followed reports that he protected the angry youth believed to be members of the New Patriotic Party (NPP), who carried out the attack at the NADMO office.

The Deputy Upper West Regional Minister, Amidu Ishaq, will act in the stead of the suspended regional Minister pending the conclusion of an investigation of the incident, according to a statement from the Presidency.

The statement added that, “President Akufo-Addo reiterates his commitment to the application of the laws of the land, which must occur without fear or favour, affection or ill-will, and without recourse to the political or ethnic affiliations of any citizen of the land.”

NADMO staff on strike
At about 5:00 pm on Wednesday, the youth from the Wa East district, numbering about 30, arrived in two pickups and a minibus at the NADMO office at the Upper West Regional Coordinating Council.

After the police got to the scene of the disturbances and effected the arrest of three persons, Alhassan Suleiman ordered the release of the suspects.

He reportedly told the police that ” This is a party matter, I will have a meeting with them and get back to you”. After that, the attackers walked home freely.

Following the incident, workers of NADMO declared a strike today [Thursday], and demanded that until the suspects are arrested, they will not return to work.

They slammed the Regional Minister , whose duty is to protect citizens as the Regional Chairman of the Security Council, for choosing to shield the attackers.

Political vigilantism in Upper West
This incident marks the third major disturbance perpetrated by youth aligned to the NPP in Upper West Region in the last few months.

On January 22, some NPP youth in the Wa municipality vandalized the residence of the Municipal Chief Executive of the area, Issahaku Moomin Tahiru.

The rampaging youth also vandalized the family house of the MCE and two other houses belonging to his supporters.

In November 2017, NPP youth in Gwollu, the capital of the Sissala West District stormed the precinct of the Assembly and locked up the District Chief Executive, Mohammed Bakor in his office.

They had accused the DCE of engaging in “divide and rule” tactics, and failing to address their concerns.

After the Wa incident, seven NPP supporters were arrested and charged with rioting, including the Sissala West Constituency Chairman of the NPP.