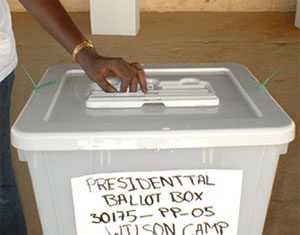 Superintendent Washington Foli, the Dormaa Municipal Police Commander, has appealed to security personnel to be extremely vigilant on Wednesday to prevent ‘macho men’ from getting hands on ballot boxes before and after the polls.

He urged them to cooperate with election officials and party agents at the various polling centres and avoid creating unnecessary tension and confusion.

Addressing a cross section of security personnel in the area after a health walk, Supt Foli asked them to strive to be professionals in their conduct, which was key to ensuring credible and peaceful elections.

He called on them to remain neutral in the performance of their duties and not to compromise on professional integrity, adding that failure on their part could spell disaster.

He said they should report at the local Electoral Commission’s Office by 0300 hours on voting day where they were expected to accompany election officers to dispatch materials to the various polling centres.