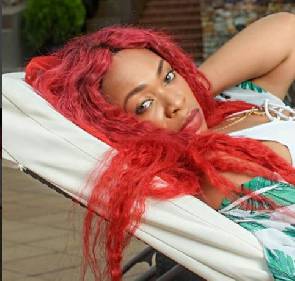 Diamond Michelle Gbagonah popularly known as Shatta Michy is believed to have been involved in some altercation with a well-known boss-chick in Accra known as Lana at a party on Boxing Day.

The misunderstanding broke out at a party hosted by Hajia4Real known in real life as Mona Montrage. The party which was dubbed “Global Wave Party” turned ‘messy’ when the two ladies decided to have a go at each other.

In a video that has been posted on social media by a patron of the party after the incident, showed Shatta Michy lashing out and throwing her hands about in the air.

The other lady, known as Lana was seen launching out to attack Shatta Michy only to be restrained by some of the party-goers.

Hajia4Real who is believed to be friends with both ladies was seen in the centre of the action trying to calm tempers between the two rather livid ladies.

The reason for the outburst which was caught on camera is yet to be ascertained but it looked as though tempers were flaring out of control.

The party was held at Club Onyx in Accra on December 26. Shatta Wale was one of the acts who was billed to perform on the night.

Shatta Michy is the longtime girlfriend of self-proclaiming dancehall king of Ghana, Shatta Wale. The couple have a son together known as Majesty.