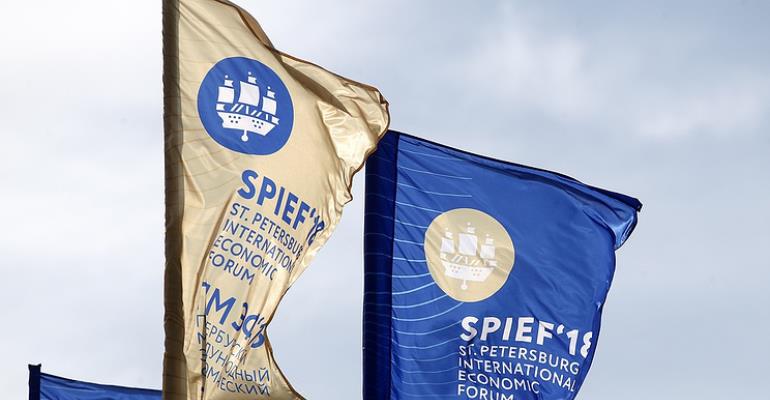 The St. Petersburg International Economic Forum 2018, one of the annual international platforms that brings together political, industry and business leaders to discuss the most pressing issues affecting global economics, development and finance, will take place on May 24 to 26 in St. Petersburg.

Ahead of the forum, the official website of the President of the Russian Federation has published his welcome greetings to participants, organisers and guests. In his greetings, Putin expressed his confidence that ideas and initiatives to be developed during the forum would facilitate the recovery and growth of the world economy.

“By harnessing the wealth of scientific and technological potential which is rapidly expanding in digital and other areas today, we can improve quality of life and boost stable and harmonious development in all nations and across the world as a whole,” he stressed in his message.

“And it is crucial that we strive towards increasing mutual trust, promoting wide-ranging integration processes, realising large-scale and promising projects. Russia is always open to this kind of partnership and cooperation,” Putin said.

According to RosCongress, the event organiser, about 15,000 guests from more than 140 countries expected to participate in the forum. France, China, India and Japan as guests of the forum will have their own exhibition pavilions on site, which will house a presentation area and a business space for delegations and representatives to interact with business partners from other countries.

For foreign participants, including Africans, the forum is very useful for networking and discussing business strategies, and serves as an important study platform useful for deepening knowledge about the economy and possible ways of transacting business in Russia.

Series of official speeches and panel discussions will undoubtedly dominate the three-day event. The special sessions on business and investment opportunities will include the “Russia – Africa Business Dialogue” that has generated increasing interests among Russian and African businesses, international companies, African governments and institutions.

According to Anton Kobyakov, Adviser to the President of the Russian Federation and Executive Secretary of the SPIEF Organising Committee, the upcoming forum will hold two special celebrations marking the occasions related to the continent: Africa Day and the 55th anniversary of the African Union.

“Economic cooperation between Russia and Africa has been developing rapidly during recent years. We have seen a positive dynamic in trade with Ethiopia, Cameroon, Angola, Sudan, Zimbabwe and other countries”, says Kobyakov. “I strongly believe that Russian-African cooperation at SPIEF, Russia’s largest forum will stimulate trade and economic ties, as well as investment activity.”

Kobyakov further disclosed that during the event, experts will share best practices and discuss new opportunities for implementing joint projects in the BRICS countries. Sergey Katyrin, the President of the Chamber of Commerce and Industry of the Russian Federation, will moderate the session.

“The paramount task for BRICS is to continue strengthening efforts aimed at solving international issues in the spirit of unity, mutual understanding and trust. The prospects for cooperation and joint efforts of the BRICS member states will be discussed at the SPIEF 2018. I am confident that this will give momentum to further development of a fruitful dialogue on key world issues,” Kobyakov says.

Over the past few years, Russian authorities have made relentless efforts toward raising Russia’s political influence and economic cooperation in some African countries. Thus, discussions at the forthcoming forum will undoubtedly focus on reviewing the past and the present as well as proposing practical and the most effective ways to facilitate investment activities and that might include promising areas such as infrastructure, energy and many other sectors in Africa.

On her part, Alexandra Arkhangelskaya, a Senior Researcher at the Institute of African Studies and a Senior Lecturer at the Moscow High School of Economics said in an interview with me that Russia and Africa needed each other – “Russia is a vast market not only for African minerals, but for various other goods and products produced by African countries.”

Currently, the signs for Russian-African relations are impressive – declarations of intentions have been made, important bilateral agreements signed – now it remains to be seen how these intentions and agreements will be implemented in practice, she pointed out in the interview.

The revival of Russia-African relations have to be enhanced in all fields. Obstacles to the broadening of Russian-Africa relations have to be addressed more vigorously. These include, in particular, the lack of knowledge or information in Russia about the situation in Africa, and vice versa, suggested Arkhangelskaya.

“What seems to irk the Russians, in particular, is that very few initiatives go beyond the symbolism, pomp and circumstance of high level opening moves. It is also still not clear how South Africa sees Russia’s willingness (and intention) to step up its role in Africa, especially with China becoming more visible and assertive on the continent,” said Professor Gerrit Olivier from the Department of Political Science, University of Pretoria, in South Africa.

Today, Russian influence in Africa, despite efforts towards resuscitation, remains marginal. Given its global status, Russia has to be more active in Africa, as Western Europe, the European Union, America and China are, but Russia is partially absent and playing a negligible role, according to the views of the retired diplomat who served previously as South African Ambassador to the Russian Federation.

“Russia, of course, is not satisfied with this state of affairs. At present diplomacy dominates its approach: plethora of agreements entered into with South Africa and various other states in Africa, official visits from Moscow proliferate apace, but the outcomes remain hardly discernible,” he said.

“The Kremlin has revived its interest on the African continent and it will be realistic to expect that the spade work it is putting in now will at some stage show more tangible results,” Professor Olivier wrote in an email query from Pretoria, South Africa.