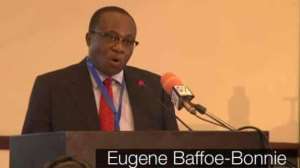 The trial of Eugene Baffoe-Bonnie, former Board Chairman of the National Communications Authority (NCA) and four others has bounced back at the Accra High Court after a long break.

The long break was to enable the accused seek interpretation at the Supreme Court over pre-trial disclosure of documents during trial.

When sitting resumed today, Mrs Yvonne Atakora Obuobisa, the Director of Public Prosecution (DPP) informed the Court that 52 documents have been filed by the Prosecution at the court’s Registry.

According to her the documents include those that they would not be tendering in court.

When presiding Judge, Justice Eric Kyei-Baffour ascertained from the various lawyers for the accused this facts, it came to light that the lawyers have not been served.

The court therefore adjourned the matter to enable defence counsels to be served with the 52 documents.

The substantive matter has been adjourned to October 16.

Meanwhile the court has slated July 30, to hear an application filed by Samuel Cudjoe, counsel for Nana Owusu Ensaw.

They have been arraigned at the Commercial Court (High Court Division) over the alleged fraudulent purchase of Cyber Security Surveillance systems at eight million dollars.

The system, which was to be used in the fight against terrorism, reportedly has some of its components missing, while it cannot be utilised.

The five officials have been variously charged with wilfully causing financial loss to the State, conspiracy to steal, stealing, using public office for private gain, in contravention of the Public Procurement Act, Money laundering and intentionally misapplying public property.

They have pleaded not guilty to the charges and have been admitted to bail in the sum of one-million dollars each with three sureties each.

Madam Gloria A. Akuffo, the Minister of Justice and Attorney General, who presented the facts, said sometime in 2015, the accused without authorisation, took a decision to purchase a Cyber Surveillance system, which they claimed was to be used for anti- terrorism operations.

Madam Akuffo said Baffoe Bonnie, Tevie and Osman without going through the process as established by law, engaged Mr Peninat Yanyi, an Israeli lawyer and businessman, who selected NSO Group Technologies Limited an Israeli company to supply the system.

The Minister of Justice said Baffoe Bonnie, Tevie, Ensaw and Osman decided to purchase the system through a re-seller.

Baffoe- Bonnie, therefore, nominated Oppong, his business partner and a Director of IDL to be the re-seller of the system.

The IDL, the Minister explained, was a company registered to provide logistics and infrastructure development.

She said investigations revealed that the supply of the surveillance systems was not the object of IDL, adding that, in furtherance to the decision of Baffoe-Bonnie, Tevie, Ensaw and Osman to purchase the cyber surveillance system, Osman signed a letter on February 2016 in the name of the National Security Coordinator and addressed it to Tevie, in his capacity as the Director General of NCA, and copied Baffoe Bonnie.

By the letter, Ms Akuffo said the National Security Council Secretariat (NSCS) solicited financial support from NCA for the surveillance system at a cost of GH 8million dollars.

The Minister of Justice said on the same day of February 24, 2016, Tevie endorsed a letter to the Director of Finance of NCA authorising payment of the system.

Prior to this request, Ms Akuffo said the accused without going through procurement process had already executed a contract for the supply of same cyber security system that the NSCS was soliciting funds for the two contracts namely the purchase of Pergasus systems and Cyber Security System.

According to her the NCA on December 2015 executed an agreement with IDL for the purchase of the Pergasus system at a cost of 5.4 million dollars which was later revised to six million dollars to include the commission of Mr Peniate, the Israeli lawyer for facilitating the business.

The Attorney General said investigations further disclosed that prior to the request made on February 24, 2016, Osman to the NCA, Tevie had already written to ECOBANK to transfer four million dollars to IDL from the accounts of NCA.

She said the transfer was done on March 11, 2016 to IDL’s account which was controlled by Oppong.

‘Out of the four million paid to IDL, Oppong transferred only one million to NSO Group Technologies Limited for the supply of the equipment leaving 3-million which was withdrawn over a period.’

The Minister of Justice said the 3-million dollars was shared among the five accused and the equipment which was shipped by NSO Group of Technologies arrived on May 31, 2016.

According to Ms Akuffo, the equipment was however delivered at a private warehouse on Spintex road owned by Alhaji Baba Kamara the then National Security Advisor.

She said the equipment was installed and tested in the private warehouse in the presence of Baffoe- Bonney and Henry Kanor, the Deputy Director General, NCA in charge of Technical Operations.

She said after the installation, in May this year, Oppong reported irregularities to the Bureau of National Investigations (BNI) which led to investigations into the purchase.

Ms Akuffo told the court that investigations revealed that the Board of NCA was not aware of the purchase of the Pergasos system nor the institutional support to NSCS to purchase the equipment.

According to the Attorney General it also came to light that NSCS Coordinator had also not asked Osman to sign the letter dated on 24 February 2016.

During the course of investigations Osman led investigators to a warehouse on the Spintex road where the equipment was retrieved.

The Justice Minister said the investigators were informed that the equipment was brought to the warehouse on the instructions of Baba Kamara.

Inventory taken by the investigators showed that some components of the equipment were missing and there was no software to facilitate its operations hence same had been rendered unusable.