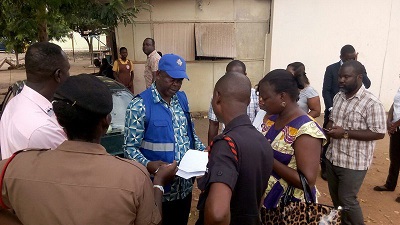 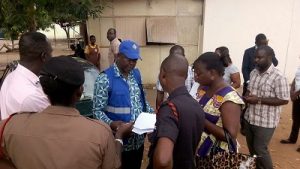 From Tema West, Della Russel Ocloo reports that there was near confusion as three police officers whose names were not on the register verbally assaulted the Electoral Commission officials supervising the exercise at the Tema Community Two police station.

A police officer, Mr Albert Amofa Adade, who claimed to have registered at Sakumono in the constituency labelled the EC officials as incompetent when his name was not found on the list.

A female officer who was in the queue also retorted that there will be a commotion at the centre if she found out her name was excluded from the list.

In all 880 registered voters are expected to cast their ballot at the centre.

The Deputy Returning Officer for the Constituency, Mr Roger Klu told Graphiconline.com that the various district commanders were asked to submit the names of officers to partake in the exercise, as such, if some names have been omitted from the list, it only meant that the names might have been excluded by the commanders and not the EC.

“We gave the supplementary list of special voters to the police to check for the names of their personnel before subsequently submitting back to the EC, so it would not be the fault of the EC”, Mr Klu said.

For more news go to: www.graphic.com.gh