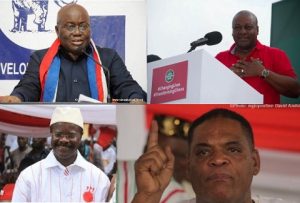 The die has finally been cast. Seven potential presidents sit on tenterhooks, and yet, undercutting each other in anyway possible to pick the only slot to the Flagstaff House.

Their fate is tied to a little over 15 million electorate, wielding Ghana’s future at the thumbs.

These eligible voters are expected to throng the about 30,000 polling stations across the country today, December 7, 2016, to take a final decision as to who governs them. Polls open at 7:00 am sharp and close at 5:00 prompt nationwide, bearing any hitches.

One presidential and 275 parliamentary positions are up for grab in this cliffhanger contest. Ketu South in the Volta Region leads as the constituency with the highest number of voters; 141, 698 people vote there.

It is followed by Dome/Kwabenya and Ledzokuku in the Greater Accra Region with a voter population of 138,557 and 137,375 respectively.

Sekyere Afram Plains 13,753 in the Eastern Region and Salaga North in the Northern Region 15, 878 have the least voters in that order.

The Electoral Commission has approved seven distinguished personalities – six men and a woman – from whom one person would be elected as Ghana’s 7th president under the Fourth Republic.

The rest are Dr. Papa Kwesi Nduom of Progressive People’s Party, Nana Addo Dankwa Akufo-Addo is on the ticket of the New Patriotic Party; Dr. Edward Mahama of the People’s National Convention; and an Independent Candidate Jacob Osei Yeboah.

However, there is no gainsaying that the 2016 elections, like the previous ones would be a two-horse race between the candidates of the governing National Democratic Congress and the New Patriotic Party.

John Mahama of the NDC is seeking re-election to end his constitutionally mandated two terms, each lasting four years. On the other hand, the NPP’s Akufo-Addo is making his third attempt at the presidency. He lost to John Mahama in the controversial 2012 election with a margin of about 300,000 votes which was finally decided by the Supreme Court.

Akufo-Addo had then lost the previous election by a little over 30,000 votes to the late Prof. John Atta Mills during a run-off. He actually led in the first round, but his 4,204,073 votes were not enough to obtain the 50 plus one percent required by law.

A total of 23 individuals picked forms to contest the 2016 presidential elections.

However, when the Electoral Commission closed nominations on September 30, only 17 mustered the courage to submit themselves for the process.

Interestingly, the Chairperson of the EC, Charlotte Osei on October 10 announced that the Commission could only accept the nominations of only four including one Independent Candidate.

Disqualified candidates were peeved by the decision, and the more aggrieved ones flooded the Commission with law suits for redress.

Many blamed the EC for being overly strict, which rather opened it up for several lawsuits that, to some extent, distracted its attention.

Prominent among the suits were filed by the nominee for the Progressive People’s Party, Dr. Papa Kwesi Nduom, and National Democratic Party’s Nana konadu Agyeman-Rawlings.

After days of legal wrangling, the Supreme Court stamped its authority, paving way for the disqualified candidates to correct mistakes on their forms that led to their disqualification.

Seven persons including one Independent were still confident and determined to lead 59-year old Ghana.

Again the EC in November made an emphatic statement that only three out of the seven were able to surmount its hurdle.

This brought the total number of persons qualified to stand for the presidential election on December 7 to seven including Dr. Nduom, Mrs. Rawlings and Dr. Edward Mahama.

Whilst the processes for the presidential nominees were ongoing, a sea of personalities were submitting themselves to similar procedures to become one of the 275 persons to be voted for as legislators for the Seventh (7th) Parliament under the Fourth Republic.

A total of 1,255 persons running on the tickets of various political parties and as independent candidates, were successful with their nominations.

At least four of the candidates have since chickened out.

The Ashanti region led the pack with as many as 206 vying to pick the 47 slots for the region. The Upper West region has the smallest number of candidates: 54 persons fighting for the 11 parliamentary seats.

The two leading political parties –NDC and NPP – waged very expensive and intensive campaigns criss-crossing the country that left the rest trailing. They espoused their manifestos to the electorate in order to secure their mandate.

The months of campaigning came to an end Monday night but not without bloody confrontations, especially between supporters of the NDC and NPP. But all the seven presidential candidates on Thursday, December 1 signed a peace accord to ensure that the peaceful atmosphere in the country is not curtailed. ALL IS SET Now the electoral referee has indicated its readiness for today’s historic elections.

The commission said it has deployed a total of 148,000 election officials. A statement issued by the Electoral Commission also said 64,000 security personnel have also been deployed to provide security and maintain law and order at the various polling stations.

The Commission says it has also dispatched 70,709 Biometric Verification Devices and each polling station is expected to receive two of the devices to authenticate registered voters before they are cleared to vote. The Commission said it has accredited over 12,000 local observers and more than 400 foreign observers for the election, which the Commission say will be a world class standard.

The Ghana Police Service said it has identified about 5000 flashpoints. The EC has indicated that 81 out of the 275 constituencies in Ghana are potential hotspots.

Due to what appears to be poor communication, the EC’s special voting for security personnel, media and election officials were held for two days.

Still many could not find their names in the special voting list to cast their votes on Thursday nor Sunday.

The two major parties have their regional strongholds. Whilst the NDC enjoys massive support from the Volta Region, the NPP draws a lot of inspiration from the Ashanti region.

Each has been working hard to infiltrate and break each other’s stronghold. Several polls have predicted a win for either NPP or the NDC, but only voters who would actually cast their ballots today can actualize these predictions.

With the trajectory of events and being guided by previous elections the Greater Accra Region and the Central – the two swing regions – would definitely be the deciders in the 2016 Presidential Election.

For now between John Mahama and Akufo-Addo, the game remains opened until a winner is determined by Mrs Charlotte Osei. Don’t forget, any of the remaining five candidates can also pull a surprise.