The trip most people wouldn’t dare to do 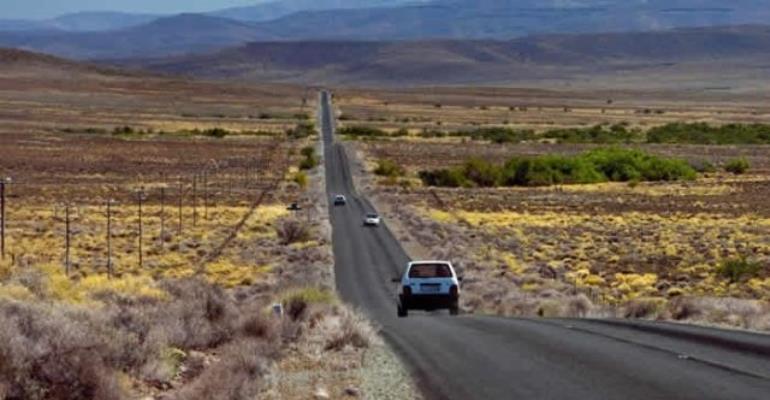 Eighty-year-old women are supposed to stay at home. The neatly dressed grandmother of our collective imagination derives her pleasure from indoor pursuits – cooking, reading, knitting. One thing octogenarian women aren’t supposed to do is embark on a solo five-month journey through Africa, driving from Cape Town to Cairo in a battered Toyota Conquest.

Julia Albu never set out to be exceptional. Her daily routine slotted neatly into what the world expects from an older woman living in a leafy village near Cape Town. Every morning she would listen to the radio, and one day the discussion turned to then-President Jacob Zuma and his extravagant taste in cars.

“I was incensed,” Albu said. “I phoned in immediately to say I was going to be 80, and my car, Tracy, was a 20-year-old Toyota and she ran beautifully. We could happily drive to London together, so why Zuma needed all these new cars was beyond me.” 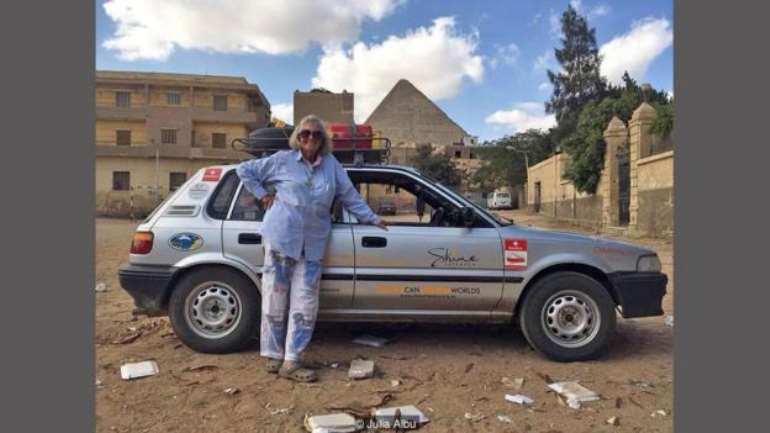 Buoyed by the enthusiastic response she received, Albu pledged on air to drive to Buckingham Palace to have tea with the Queen – and before long, the seeds of what had begun as a joke started germinating.

“My partner had recently died, you see,” Albu said. “It was an exhausting process, and after all that I thought, ‘My goodness, there really isn’t much of life left’. I feel like I’m 36 from the shoulders up and 146 from the shoulders down, and I wanted the younger me to win for once.”

Six months later, on the dawn of her 80th birthday, Albu’s youthful half triumphed. With Tracy’s grey, squat exterior emblazoned with the rainbow-coloured stickers of her sponsors, Albu set off on a frosty morning from her house in Jakkalsfontein, hurtling up a gum tree-lined road pointing north.

“I was raring to go,” she said. “I had been inoculated against every known virus, although the doctor said he didn’t think I’d need any STD precautions, which was insulting. And Tracy was looking beautiful, upholstered from the seats to the sun visors in pink florals.”

A cavalcade of Harley Davidsons bid her farewell outside Johannesburg, but other than that, South Africa passed in a blur of Karoo pepper trees and cold winter nights. And so it was left to Botswana to give Albu her first taste of African adventure.

“We were pottering along the road when an elephant nearly came to blows with poor Tracy. And the potholes, oh they were too awful. But it all felt magical, from the heat drifting through my windows to the baobab trees. I knew I was going to be alright because everyone I met was so kind. They called me ‘Gogo’, which means grandmother.” 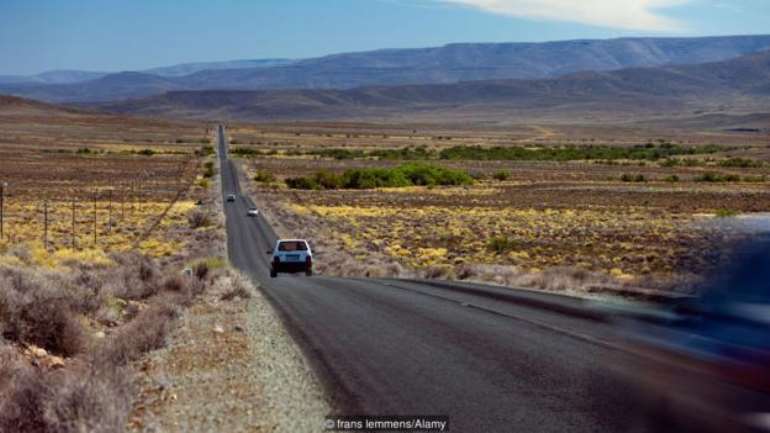 In those early weeks, Albu often slept in a tent on the side of the road. But while her spirit was indomitable, her body was not, and sleeping on the ground soon took its toll. Her family rallied around to help – one daughter eventually drove with her to Zimbabwe, while her son accompanied her through Malawi.

But interspersed with moments of hardship was Albu’s utter exhilaration at seeing the continent she was born in finally blossoming into focus. Her eyes lit up when she talked about the majesty of Lake Malawi or Zimbabwe’s Victoria Falls, but also when she described the details of life on the road. There was the man selling wicker furniture under a dusty Malawian tree, and the Zambian schoolgirls who read to her. She talked about vendors frying mice, truck drivers sharing food with her, and ripe tomatoes she plucked off the vine.

“I never felt lonely, even when I was alone,” she said. “I loved the times my children visited, and the intimate moments I spent with each of them. But you must remember Tracy is also an older lady just like me, and this was something we were doing together.”

Albu’s age was clearly a mixed blessing. African border posts can be notoriously difficult to negotiate, but she breezed through most of them. The truck drivers she had been sharing the road with began to recognise her and ushered her to the front of the queue.

“The belief in the wisdom of your elders is ingrained in a lot of African cultures – though often they just found me hilarious,” she said. “One Ugandan customs official asked why I was driving to London. ‘To have tea with the Queen’ I replied. His eyes were like marbles, and my passport was stamped in a jiffy.”

Nonetheless, I sensed Albu’s profound frustration at being physically unable explore the nooks and crannies of the continent unfolding around her. “Oh to be 40 years younger and not in this godforsaken body,” she said. “The mountains I would have climbed; the lakes I would have swum in.” 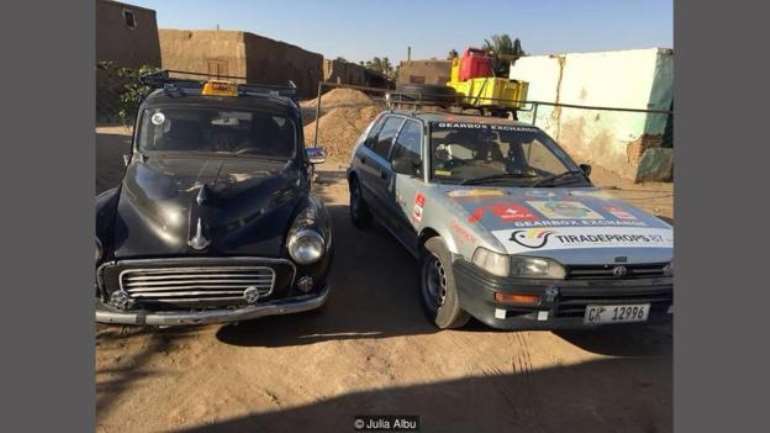 Instead, Albu quenched her boundless thirst for Africa through its people. Her travel diary is filled with page upon page of names, numbers and business cards, including the addresses of hundreds of teachers she sent schoolbooks to through a charity she is affiliated with.

In Tanzania, she stumbled upon a small village and began talking to one of the elders, named William. They spent hours together that day and the next, sitting on a bench while putting the world to rights. Months later, a letter from him plopped through her door in Cape Town. “Your radiant and full-of-life personality is amazing,” he wrote. “Your willingness to share the good moments of others taught me what life can mean. I, in my own way, promise to give you company.”

During the trip, Albu learned to shake off age with a flick of her hair. In Tanzania, at a honeymooner resort, she peeled off her dress for a midnight swim. In Ethiopia, she camped with eager 20-somethings in the Danakil Depression , a neon-hued moonscape of lava and salt plains that is often described as the ‘gateway to hell’.

Her enthusiasm for Ethiopia is particularly infectious – for the dramatic landscapes and for the profound spirituality that imbues the place. Sudan, too, she describes with a sense of awe that I suspect is reserved for an Africa with which she no longer feels familiar.

“I think I got my moment of purest joy when I was driving alone through the Sudanese desert on the long road to Khartoum,” she said. “My tape of hymns was playing at full blast and I was singing ‘Jerusalem’, thinking about England’s green and pleasant land while a shepherd shuffled through the sand in the distance.” 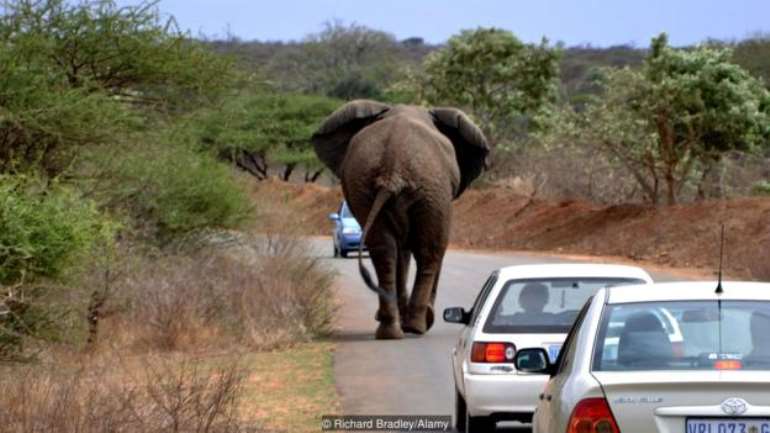 Albu says she got her first taste of African adventure in Botswana when an elephant nearly came to blows with her car (Credit: Richard Bradley/Alamy)

Albu’s African odyssey ended in Egypt, the country where her luck in namedropping the Queen finally ran out. Held at border control for several days while Tracy was fitted with Arabic number plates, her only option was to sleep in a cafe. “I’m not sure if you’ve ever spent the night alone in a room with seven Egyptian men, but it certainly was an experience,” she said. “They were kind though, and if they were surprised I was a woman on my own, they didn’t show it.”

Because it is not just Albu’s age that has captured our imagination, it is also her gender. Women today fight for political, economic and sexual equality, but the decision to drive alone through Africa is one that would raise eyebrows in even the most tolerant of societies.

“But why should men be the only ones who are allowed to go off and have big adventures on their own?” Albu asked. “I was never afraid for my life on that trip. Yes, when I was a girl the thought of me driving alone through Africa would have been utterly absurd – but the world has changed, and I’m jolly glad it has.”

Up through Egypt she went, stopping off in Aswan and The Valley of the Kings and finishing in the polluted streets of Cairo. On her last day, she parked on the banks of the Nile to collect some murky river water, which was destined to sit on her mantelpiece next to bottles filled up at the source of the White Nile in Tanzania and the Blue Nile in Ethiopia. 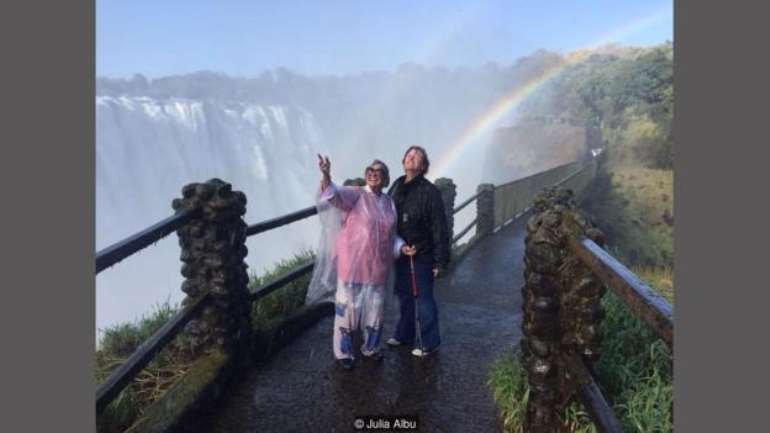 Albu’s children joined her for parts of her journey, but most of the time she drove alone (Credit: Julia Albu)

From Cairo, Albu flew back to Cape Town, watching the continent unfold below her and pitying her fellow passengers for their sky-high perspective. After recuperating in Jakkalsfontein for a few months, Albu boarded a plane to Europe and was reunited with Tracy – who had languished for weeks in a container in Greece after crossing the Mediterranean by ferry. From Greece, she drove through Albania, Montenegro, Croatia, Slovenia, Austria, Germany and Holland, and arrived in London for the summer season.

“Oh, I was dying to have tea with the Queen – particularly after telling the world and his wife that I was going to,” Albu says. “But it was the week of Royal Ascot and apparently she was otherwise engaged. The English are a strange breed – I’m not sure they appreciated quite how long my journey to Buckingham Palace was.”

Although astoundingly, London was not the final stop in Albu’s odyssey. Last week, she crossed the Channel again and is currently heading for the heel of Italy, from where she will sail for Tunisia and begin her drive to Cape Town – crossing Africa overland for the second time in as many years.

“Well, why not? What do you want me to do, sit on this sofa and wait to die?” she asks, with a laugh. “There is a freedom that comes with old age that so many people don’t realise. I didn’t know it before my adventure, but at my age you’re actually freer than you’ve ever been – you lose a husband and the children are grown, and you worry less about the consequences of everything.” 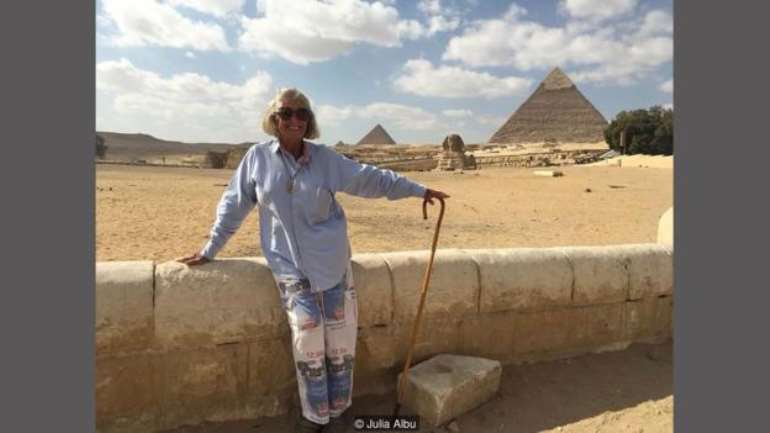 Albu: “I didn’t know it before my adventure, but at my age you’re actually freer than you’ve ever been” (Credit: Julia Albu)

We have a tendency to treat older people with kid gloves, but excitement and adventure are not prerogatives of the young. And if the inhabitants of Buckingham Palace one day read about Albu’s story and send an embossed invitation down to South Africa, she and Queen will undoubtedly have a lot to say on the subject.