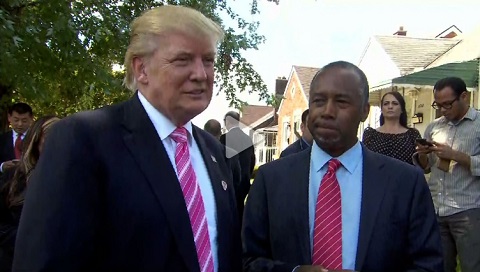 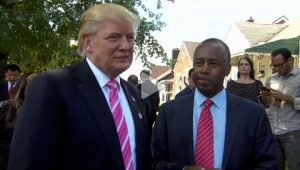 Ben Carson will be nominated as the next secretary of the Department of Housing and Urban Development, the Trump transition team announced Monday.

“I am thrilled to nominate Dr. Ben Carson as our next Secretary of the US Department of Housing and Urban Development,” President-elect Donald Trump said in a statement. “Ben Carson has a brilliant mind and is passionate about strengthening communities and families within those communities.”

During their primary fight, though, Trump had derided Carson as “super low energy” and delivered a number of sharp attacks on Twitter, questioning Carson’s temperament and qualifications for office.

“With Ben Carson wanting to hit his mother on head with a hammer, stab a friend and Pyramids built for grain storage – don’t people get it?” Trump tweeted in November of 2015, when he and Carson were still rivals. At a rally in Fort Dodge, Iowa, the same month, Trump had delivered a similarly blistering attack on Carson.

“If you’re a child molester, a sick puppy, a child molester, there’s no cure for that. There’s only one cure, and we don’t want to talk about that cure, that’s the ultimate cure. No there’s two, there’s death and the other thing.

“@RealBenCarson is a great choice for @HUDgov. A shining example of overcoming poverty, he will put focus on dignity rather than dependence,” Ryan tweeted.

“[Trump] has no selected someone woefully unqualififed to run the Department of Housing and Urban Development. During his time in Baltimore, Dr. Ben Carson was a phenomenal neurosurgeon, but he has no experience developing housing policy affecting tens of millions of households or running a complex federal agency, as his own spokesman admitted just last month,” the Maryland representative said in a statement.

Cummings was referencing reports that Carson rejected a previous offer from Trump to be the next secretary of Health and Human services because he felt he was too inexperienced to run a federal agency, according to longtime aide Armstrong Williams. Responding to those reports, Williams had said, “He’s never run an agency and it’s a lot to ask. He’s a neophyte and that’s not his strength.”

Carson’s unsuccessful primary campaign was punctuated by rookie blunders and odd claims, including that the Egyptian pyramids were used to store grain.

He is known for offering provocative commentary on a wide range of issues, including comparing the modern American government to Nazi Germany in a March 2014 interview with Breitbart, and saying at the Voter Values Summit in 2013 that Obamacare is “the worst thing that has happened in this nation since slavery.”

Carson endorsed Trump shortly after he dropped out of the contest, becoming only the second former Republican candidate to do so after Gov. Chris Christie.

The secretary of housing and urban development oversees federal public housing programs and helps formulate policy on homelessness and housing discrimination. As is the case with all cabinet secretaries, Carson needs to be confirmed by the Senate.

Carson had signaled he would be named to the job Wednesday afternoon, posting on Facebook that an announcement about his forthcoming role in the administration.

“After serious discussions with the Trump transition team, I feel that I can make a significant contribution particularly to making our inner cities great for everyone,” Carson wrote. “We have much work to do in strengthening every aspect of our nation and ensuring that both our physical infrastructure and our spiritual infrastructure is solid.”

Trump promised during his campaign to prioritize the restoration of America’s inner cities, though he frequently courted controversy by using exaggerated rhetoric that painted a bleak portrait of minority communities.

Carson was one of the large field of Republican presidential candidates. He enjoyed an early surge in the polls after he announced his campaign in May 2015 and ran mostly on his biography rather than policy. He bowed out of the race after a disappointing finish on Super Tuesday.

Carson admits that he had a violent temper in his youth, and says one of the defining moments of his life occurred when he was 14. Carson said he tried to stab a schoolmate, but the boy’s belt buckle blocked the knife. After praying for three hours, Carson “came to an understanding that to lash out at people is not a sign of strength, it was a sign of weakness.” A CNN report raised questions about Carson’s claims that he was violent and angry as a teenager.

When Carson — a famed neurosurgeon — became the director of pediatric neurosurgery at Johns Hopkins at age 33, he became the youngest person to head a major division in the hospital’s history. His parents separated when he was eight, after it was revealed his father was a bigamist. He and his brother were raised by their mother.

The job of HUD secretary became vital after the 2008 housing crisis.

President Barack Obama’s first pick for the job, Shaun Donovan, oversaw the nearly $14 billion that HUD received from the American Recovery and Reinvestment Act, known as the stimulus.

Donovan left the job in 2014 and was replaced by Julian Castro, then mayor of San Antonio.

The housing secretary also oversees programs that administer mortgage insurance to prospective homeowners and give rental subsidies to lower-income families.