Unorthodox queues formed at polling stations ahead of elections 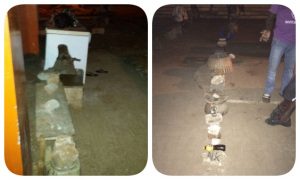 With few hours to go before Ghana’s 2016 general elections, unorthodox long queues have started forming at various polling stations across the country, with people hoping to be among the first to cast their vote.

On Tuesday night, eligible voters seeking to cast their vote early so they could continue to their various work places, used various objects to form queues ahead of the opening of polls at 7:00am on Wednesday, December 7.

By 7:30pm Tuesday, some anxious eligible voters showed up at their respective polling stations to keep vigil in a queue while others used stones, sandcrete blocks, wooden benches and refrigerators among other items to secure spots in the queue.

A little over 15 million eligible voters are expected to cast their vote in today’s general elections which will elect a the next president for Ghana under the fourth republic as well as 275 members of parliament.

The elections are being contested by seven presidential candidates from six political parties and one independent candidate, as well as 1,255 people who are vying for the 275 seats in the country’s legislature.

TV3’s Stanley Blewu reported from the Botwe School polling station in the Okaikoi constituency in Accra that scores of electorate started queuing Tuesday night just about six hours to the opening of the polls.

She said while some were keeping vigil in a queue, others came to the polling station with various objects and items to form queues after which they left to their homes to catch some sleep and to return dawn Wednesday.