BREAKING NEWS
GMT+2 08:18
Home General News We Have Great Respect For The People Of Africa–US Ambassador

We Have Great Respect For The People Of Africa–US Ambassador 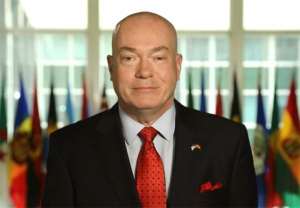 The United States Embassy in Ghana has reiterated that it has “great respect for the people of Africa.”

In a tweet on Saturday, the Embassy seems to be distancing itself from the alleged comment of the U.S. President Donald Trump denigrating African countries.

President Trump described African nations, along with Haiti and El Salvador, as “shithole countries” whose inhabitants were not desirable as immigrants to the U.S.

“Our commitment to Ghana and all our African partners remains strong. It’s an honor for our staff to serve here alongside Ghanaians, and we deeply value our relationship with them,” the Embassy added.

We have great respect for the people of Africa. Our commitment to Ghana and all our African partners remains strong. It’s an honor for our staff to serve here alongside Ghanaians, and we deeply value our relationship with them. — US Embassy Ghana (@USEmbassyGhana) January 13, 2018

Last year, Robert Jackson, the US Ambassador to Ghana, told Joy News that Trump’s election would not change the relationship between the United States and African nations.

“Our African policies have changed very little of last several decades. I expect that our assistance programmes would continue pretty much as they are,” he said.

The U.S. government has faced a sustained diplomatic backlash over the past few days due to the comments, as well as widespread criticism from civil society.

Ex-president John Mahama has branded President Trump as a racist after he reportedly used that crude language.

In a Twitter message Friday, the Mr Mahama accused Mr Trump of pursuing a policy of making America “White Again” instead of “Great Again.”

Africans and Haitians come from ‘shithole’ countries? Isn’t Trump demonstrating that he’s nothing but a racist and pursuing a policy of ‘Make America White Again’? I congratulate Botswana for showing the way. Our AU Presidents must respond strongly to this insult. — John Dramani Mahama (@JDMahama) January 12, 2018

Shithole? Thought they said he was so impressed with us just last September? pic.twitter.com/Z8Y6sG4DBK — John Dramani Mahama (@JDMahama) January 13, 2018

President Akufo-Addo also reacted on Saturday describing the language used by the American leader as “extremely unfortunate” adding his nation was not a “shithole country.”

Nana Akufo-Addo, who assumed the presidency last January, made the comments on his Twitter account on Saturday.

The language of @realDonaldTrump that the African continent, Haiti and El Salvador are ‘shithole countries’ is extremely unfortunate. We are certainly not a ‘shithole country’. We will not accept such insults, even from a leader of a friendly country, no matter how powerful. — Nana Akufo-Addo (@NAkufoAddo) January 13, 2018.