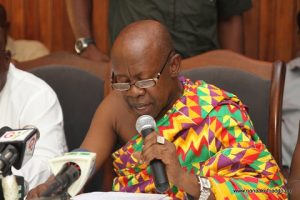 The Western Regional House of Chiefs has indicated its preparedness and determination to assist the President-Elect of the Republic, Nana Addo Dankwa Akufo-Addo, in the fight against corruption, when he assumes the reins of governance on January 7, 2017.

According to Ogyeahorhuor Kwaku Gyebi II, the President of the Western Regional House of Chiefs, who is also the Chief of the Sefwi Anhwiaso Traditional Area, corruption, in recent times, “is the cancer that is destroying our motto, ‘Freedom and Justice’, and tearing the fabric of our nationhood apart.”

Ogyeahorhuor Kwaku Gyebi II, to this end, has assured President-Elect Akufo-Addo that “you can count on the Chiefs of this region to support you in the effort to weed out or minimise corruption. “

The President of the Western Regional House of Chiefs made this known on Tuesday, December 27, 2016, when Nana Akufo-Addo, in the company of the Vice President-Elect, Alhaji Dr. Mahamudu Bawumia, and stalwarts of the New Patriotic Party, paid a courtesy call on the House to thank the Chiefs and people of the Region for their massive support on December 7.

Ogyeahorhuor Kwaku Gyebi II noted that the worst form of corruption is “the bureaucratic and judicial corruption”, explaining that “it shreds our faith in the institutions of state. Our nationhood is challenged by all faces of corruption which goes against every grain of our traditional values.

As Chiefs, we are also aware that it is leadership that moulds morality and values. This explains the analogy: ‘when a fish is rotten its starts from the head. For any CEO of an organisation, there is a saying – ‘The buck stops on my desk’”.

The President of the Western Regional House of Chiefs commended Nana Akufo-Addo’s recent statements made at his encounter with the Private Enterprise Federation on Wednesday, December 21, where the President-Elect stated that “those who seek to be in my government to make money are going to be disappointed. They will make money in the private sector, not in the public sector.”

This statement, according to Ogyeahorhuor Kwaku Gyebi II, is proof of Nana Akufo-Addo’s determination to fighting corruption.

He was confident that the President-Elect, in the fight against corruption, “will put in place, as soon as you come into office, a high-level implementation committee for the National anti-corruption plan.”

Touching on the traits exhibited by President-Elect over the years, Ogyeahorhuor Kwaku Gyebi II noted that Ghanaians have taken their time to know and understand Nana Akufo-Addo, adding that the result of this year’s election was a vote of confidence in his leadership abilities.

“In spite of the vile propaganda to malign your person, Ghanaians know you in the political field. You have consistently stood for the freedom and democratisation of Ghana. You were the General Secretary for the People’s Movement for Freedom and Justice (PMFJ). You were part of the Alliance For Change (AFC).

In your professional capacity, you have had the courage to defend the media on the question of freedom. It was thought provoking that it was the media freedom that was also used to castigate and denigrate your person and subvert your character,” he said.

He continued, “As a part of the Kufuor administration, you served with unquestionable integrity and humility. Your 2012 election petition and the acceptance of the verdict revealed your respect for this nation and her institutions and your attachment to peace.”

The President of the Western Regional House of Chiefs added that “over time, your actions have contributed immensely to the growth and progress of our nation. You have consistently demonstrated an unusual commitment to Ghana, which we believe is bringing you into office as our 1st Gentleman, by God’s grace and the will of the people, on 7th January 2017.”