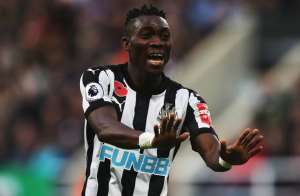 Newcastle star Christian Atsu could be headed to the London Stadium as a replacement for his international team-mate Andre Ayew.

With Michail Antonio’s struggles with injuries, West Ham United manager David Moyes is keen to strengthen his wing options in the fight to maintain the clubs Premier League status.

A move for Atsu, however, only looks likely if the Hammers fail in their pursuit of first-choice target Adama Traore of Middlesbrough.

Last month, Atsu put up one of his best performances for Newcastle as he scored a goal and set up another during a dramatic 3-2 win for the Magpies.

The 26-year-old has so far made 19 League appearances and scored two goals this season.

His deal with the Toon Army was made permanent last summer following a successful loan spell from Chelsea.

The deputy Ghana national team captain is all but certain for a move away, with Swansea being his most likely destination.