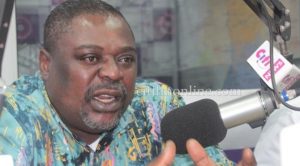 The Deputy General Secretary of the National Democratic Congress (NDC), Koku Anydoho has denied claims that members of the party launched an attack on the Nima residence of the New Patriotic flagbearer, Nanna Akufo-Addo on Sunday morning.

According to him, the New Patriotic Party (NPP) rather unleashed its supporters to attack them while they were on a health walk in the area.

Mr Anyidoho, in a Citi News interview admitted there was some mishap around the NPP flagbearer’s house but said that could not be attributed the NDC members.

“Yes there was some small mishap at the Nima police station area but check the records, who were the ones holding the guns, was it us or Akufo-Addo’s hoodlums. Nobody in our group wielded a gun. It was Akufo-Addo hoodlums that wielded guns so go to them and ask them why their wielded guns when there was no provocation,” he said.

He added that, “There was no exchange of gun shots, it was the NPP guys who fired. There was no reprisal attack from us. They [NPP] fired. It was a one-sided barbaric attempt to create confusion and disrupt and disturb the mammoth health walk we had this morning.”

Mr Anyidoho, who said he participated in the 4-hour walk described as “blatant lies” allegations by the NPP Director of Communications, Nana Akomea that Mr Ako Gunn, one of the radio panelists freed by President John Mahama in the recent Montie trio saga led the attacks this morning.

“He [Nana Akufo-Addo] living at Nima does not stop us from having a health walk on that road. Even where the President lives, people have health walk there, so who is Akufo-Addo?” he quizzed.

Members of the two political parties clashed on Sunday morning during a health walk of the NDC resulting in the pelting of stones and firing of gunshots.

The Director of Communications of the NPP, Nana Akomea, in a statement issued hours after news of violence at Nana Akufo-Addo’s house broke said,  the NDC was there mainly to assault NPP supporters and create an environment of fear within Ghana 24 days to the election.

‘We’ll not be intimated by NDC attacks’

The Acting General Secretary of the NPP also in a separate statement said the party would not be intimidated by such attacks by the NDC in the runup to this year’s polls.

He said the party will legitimately resist any attacks on its supporters and flagbearer.

He also called on President Mahama must openly condemn the incident, which he says was aimed at attacking the flagbearer and his household.

Meanwhile, Criminal Investigations Department of the Police service have commenced investigation into the clash between the New Patriotic Party (NPP) and the National Democratic Congress (NDC) at the residence of Nana Akufo-Addo, flagbearer of the NPP.

The Director of Public Affairs of the Ghana Police Service, Superintendent Cephas Arthur said, “the Police officers from the Crime Scene management team were in the [NPP] flagbearer’s house to evaluate and assess what is alleged to have happened there. They have gone to commence investigations into the incident that happened here in the morning.”

“It is early days yet to say anything about what really happened, how it was triggered and exactly what took place but I can assure you that before long the Police will find all the whats, all the whys and all the hows so that we can accordingly inform the members of the public,” he added.