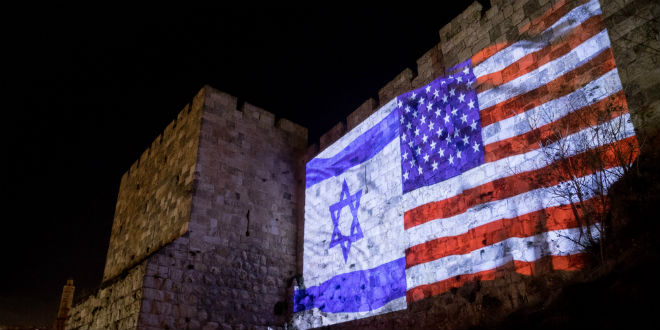 The Israeli and the American flags are screened on the walls of Jerusalem’s Old City, on December 6, 2017 in celebration of President Donald Trump’s recognition of Jerusalem as Israel’s capital city. (Yontan Sindel/Flash90)

Over two hundred prominent Israeli rabbis sent a letter of gratitude to President Donald Trump, blessing him in the manner that God blessed Joshua as he led the Jews into Israel and stating that Trump’s acknowledgement of Jerusalem as Israel’s eternal capital assures him a permanent place in the annals of Jewish history.

“You have a rare privilege now to be the first president to spearhead the recognition of Jerusalem as the eternal capital of the State of Israel,” the rabbis wrote.

“We merit living in a generation in which prophecies are being fulfilled, one after the other,” the letter continued, emphasizing that Trump is playing his role in that process.

“The presidents of America merited standing by Israel in actualizing the prophecy of the return to Zion and the building of the State of Israel. “

It concluded, “We are sure that you will be remembered in the history of the Jewish people forever as one who stood at the fore and was not afraid. May God’s promise to Joshua be fulfilled upon you.”

The letter ended significantly by quoting the Book of Joshua.

I charge you: Be strong and resolute; do not be terrified or dismayed, for Hashem your God is with you wherever you go. Joshua 1:9

This verse was the blessing that God gave to Joshua when he took over from Moses in leading the Jewish people to take possession of the Promised land.

READ NOW: Prophecy of Nations ‘Gazing on Jerusalem With Joy’ Unfolds as Czech Republic, Philippines Join US in Affirming Capital

Rabbi Shmuel Eliyahu, the chief rabbi of Tzfat and the initiator of the letter, said in a statement to the media, “We see this recognition as yet another stage in the implementation of Isaiah’s prophecy for the non-Jews.” The rabbi quoted the Book of Isaiah.