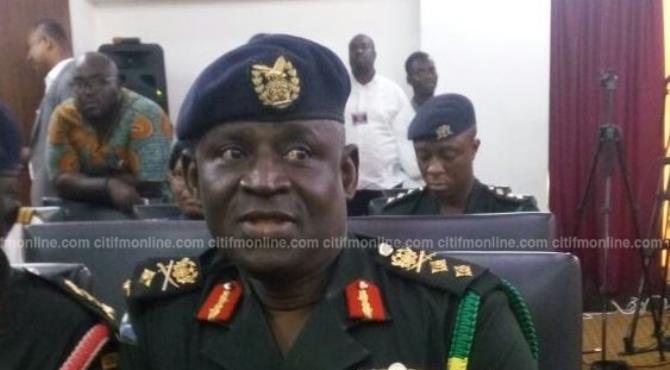 He is taking over from Air Marshall Samson Oje who has retired, and bid the President farewell.

Major General Akwa is currently the Chief of Army staff; but also served as the Commandant of the Kofi Annan Peacekeeping Training Center.

In the rank of Brigadier General, served as the Western Brigade Commander/Ghanaian Contingent Commander, MONUSCO. Was responsible for the largest sector of the MONUSCO operational area comprising six out of eleven Provinces. Exercised command over 2000 officers and men from twenty- five countries. Deployed and coordinated the defence of Goma in the North Kivu Province of the Democratic Republic of Congo during the M23 onslaught in July 2012. Also coordinated the evacuation of 30,000 refugees from Congo-Brazzaville to the Equateur Province in October-December 2012.

In the rank of Brigadier General, commanded the Ghana Military Academy. Was a permanent member of the Selection Board for selecting suitably qualified candidates into the Ghana Military Academy. On an annual basis, was responsible for training over 150 Officer Cadets for commissioning into the Ghana Armed Forces.  Also had responsibility of administering over 200 permanent staff, both military and civilian.

In the rank of a Colonel, was the Military Assistant to the President of the Republic of Ghana/Commander -in-Chief of the Ghana Armed Forces. Contributed to policy discourses on the deepening of civilian control over the security sector; particularly ensuring that the military civilian-subordinated and appropriately sized with improved transparency and accountability for national defence. Also provided policy briefs on military and security matters as and when required.

In the rank of Colonel, served as the Military Assistant to the Minister for Defence. Was responsible for liaison between the Ministry of Defence and the Military High Command. Contributed to policy dialogues on capacity building to enhance skilled, appropriately equipped and motivated troops that could respond to crisis and emergencies international/sub-regional and national levels.

In the rank of Lieutenant Colonel, served as the Commanding Officer of the 2nd Infantry Battalion of the Ghana Army. Had responsibility for the Internal Security of two strategic, mineral producing Regions in Ghana. Frequently conducted Counter Insurgency and Internal Security operations to maintain law and order and boost economic activities in the Regions. Was responsible for the command, training and administration of over 800 officers and men and women of the Battalion and the welfare of their families as well as other civilian workers.

In the rank of Major, served as a Tactical Instructor at the Ghana Military Academy and the Army Combat Training School. Had instructional assignment at the tactical level for Officer Cadets and Young Officers.

In the rank of Major, served as a Directing Staff at the Ghana Armed Forces Command and Staff College (Junior Division). Undertook instructional duties on Staff Functions and Procedures for Grade Three Staff Officers.

In the rank of Major, served as the Assistant Director Army Training at the Ghana Army Headquarters. Was responsible for co-ordinating courses, both local and overseas, for Army Officers.

In the rank of Captain, served as the Operations and Training Staff Officer at the Headquarters of the 1 Infantry Brigade Group. Was responsible for coordinating operations and training matters of six major Units in the Formation.

In the rank of Captain, served as the Adjutant in the 2nd Battalion of Infantry, Ghana Army. Was responsible for Unit discipline and the co-ordination of all training, administration and logistics matters in the Battalion.

In the rank of Captain, served as a Company Commander in 2nd Battalion of Infantry, Ghana Army. Was responsible for command, training and administration of troops at the Company level and also the welfare of troops’ families.

In the rank of Lieutenant served as the Intelligence Officer and Adjutant in the 1st Battalion of Infantry, Ghana Army. Was responsible for collection, collation and dissemination of intelligence at the unit level as well as the discipline and orderliness of the Battalion.

In the rank of Second Lieutenant, served as a Platoon Commander in the 1st Battalion of Infantry, Ghana Army. Was responsible for command, training and administration of troops at the Platoon Level and also the welfare of troops’ families.

Served as the Western Brigade Commander/ Ghanaian Contingent Commander with the United Nations Stabilization Mission in Congo (MONUSCO). Had responsibility for the largest sector of the MONUSCO operational area; (i.e. 6 out of the 11 provinces). Also was responsible for the provision of security cover during the Francophonie Conference held in KINSHASA in October 2012. Coordinated the security and logistics arrangements for the return of over 30,000 refugees from Congo Brazzaville to the Equateur Province of DR Congo. Deployed an infantry Company to Goma to hold the airport in strength against the M23 onslaught which proved very successful.

Served as Deputy Commanding Officer of Ghana Battalion which was part of the United Nations Transitional Authority in Cambodia (UNTAC). Supervised and monitored the 1993 elections which restored democracy to Cambodia.

Served as a Military Observer with the United Nations Iraq-Kuwait Observation Mission Liaison (UNIKOM). Whilst with UNIKOM was re-deployed to serve with the Military Liaison Team in the former Yugoslavia to prepare the grounds for the insertion of the United Nations Protection Force (UNPROFOR).

Served with the United Nations Interim Force in Lebanon as Personnel Officer with responsibility for the administration of over 800 Officers and men.

Served with the United Nations Emergency Force II as a Platoon Commander. Was responsible for the provision of security at the Sinai Field Mission which was an early warning station to monitor intrusions into the demilitarised zone of the theatre of operations.