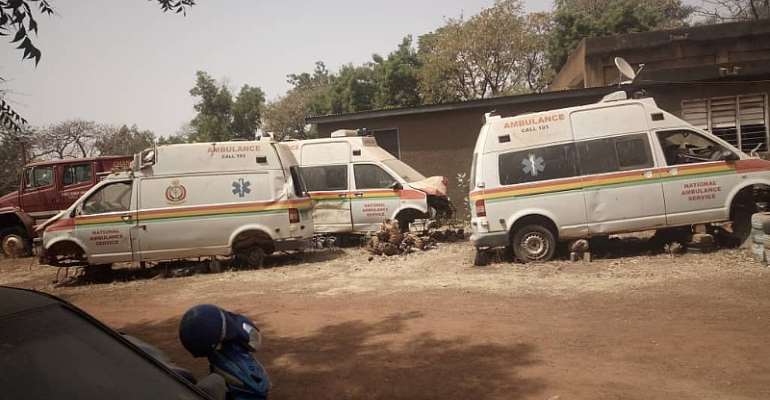 Dr Hafiz Bin Salih, Upper West Regional Minister has disclosed that all the nine government ambulances serving the health needs of the people in the region are currently grounded.

The Regional Minister who described the situation as sad said he had contacted the Chief Executive Officer of the Ghana Ambulance Service, Professor Ahmed N. Zakariah who assured him that four of the ambulances would be revived within this month to help manage the situation.

Dr Bin Salih who disclosed this during the Jirapa Municipal edition of the meet the press initiative, said apart from that, they were also waiting for the government to distribute the Mercedes Benz Ambulances that were imported under the “One-Constituency-One-Ambulance” project.

The Regional Minister also used the opportunity to clarify some misconceptions about the “One-District-One-Factory” (1D1F) programme, saying it was a private sector-led initiative.

“What the government does is to support and facilitate the private investor to have access to funds”, he added.

Dr Bin Salih disclosed that eight factories had been approved for the region out of which three would be in Wa Municipal, two in Sissala West and one each in Lawra Municipal, Nandom and Sissala East Districts.

On poor educational performance in the region, Dr Bin Salih hinted that the Regional Coordinating Council (RCC) would soon hold a stakeholders’ conference to discuss the issue of indiscipline and poor performance at the basic and Senior High School levels in order to come out with the way forward to address the challenge.

The Regional Minister said the Ministry of Roads and Highways had given approval for the Department of Urban Roads to carry out some road projects within the Municipality in order to give it a facelift.

Madam Florence Ansongmwini, the Jirapa Municipal Director of Health Services said four out of six doctors in the Jirapa St. Joseph Hospital were on study leave.

She said even though the two remaining doctors were hard working, the hospital served as a referral centre, hence, received overwhelming number of patients making it difficult for the two to manage.

This, she said had resulted in patients waiting longer hours in queues to be attended to which further resulted in some patients doing self-medication in order to avoid the delays at the hospital.

Despite the challenge, the Municipality had not recorded any maternal death for the past two years; a feat Madam Ansongmwini said was commendable.