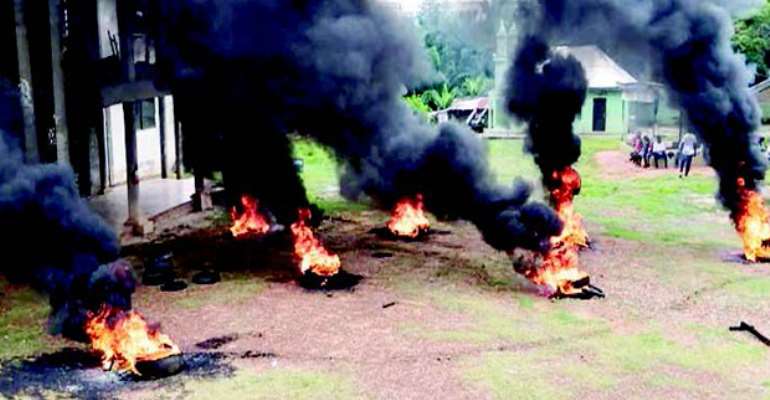 There was near pandemonium at the Ashanti regional office of the opposition National Democratic Congress (NDC) when supporters of the party besieged the place and started causing trouble.

They were registering their frustration over the decision of the party to disqualify Masawudu Mubarick from contesting to lead the party for the 2020 general election in the Asawase Constituency.

The party disqualified Masawudu and announced incumbent NDC MP Mohammed Muntaka Mubarak as the candidate for the party in Asawase and since the decision, there has been uneasy calm in the party in the constituency, which is having a spill-over effect on other areas.

Hell broke loose yesterday at the party’s regional office in Amakom, which is not far from Asawase, when some heavily-built men besieged the place to show the executives ‘where power lies’ for preventing Masawudu from contesting the election.

It was the same party office that Wasihu Iddrisu, 35, a member of the NDC Taskforce, was shot and killed by members of the Hawks, another NDC vigilante group, on February 18.

The group calling itself ‘Fire-For-Fire’ said they would not allow the Functional Executive Committee (FEC) of the NDC which affirmed the decision to disqualify Masawudu to subvert the will of the people of in the Asawase Constituency.

Wielding offensive weapons, the hoodlums chanted war songs and invaded the party office around 10:00am, amid threats to shed blood.

Before ordering the officers to vacate the party office, the hoodlums displayed their party ID cards.

The frightening manner in which the aggrieved NDC members invaded the place sent fear into the regional NDC executives, who were in the office at the time, compelling them to run helter-skelter to save their lives.

Eyewitnesses narrated that some party executives sustained minor injuries whilst they were running to save their lives, but it is still yet not confirmed.

However, DAILY GUIDE learnt later that the Asawase Constituency vice chairman was beaten up by the goons and he had to escape, leaving behind his car.

After chasing away all the party officials from the office, the aggrieved NDC members then locked the offices with huge padlocks. They then threatened that they would only open the padlocks after Masawudu has been allowed to take part in the Asawase NDC polls.

Some of the people were also seen throwing big stones at the party’s office building, clearly to demonstrate that they were ready to fight anybody, including the security agencies.

Having taken over the place, the blood-thirsty NDC members numbering about 100 then resorted to the burning of car tyres just in front of the regional office.

The supporters also warned that they would continue to cause more troubles in the constituency if the FEC decision is not changed for Masawudu to enter the race.

“We are sending this signal to them to sit and rethink and resolve the issues and for the interest of the party to be considered first before any individual,” one of the troublemakers said, adding, “Muntaka is not NDC, and NDC is not Muntaka. We are the delegates, we are the branch executives and we made Muntaka who he is today. So they should think about the future of the party.”

Already, there are speculations that Masawudu is planning to go as independent candidate in 2020.

Nana Wiafe, who is a dyed-in-the-wool supporter of Masawudu, announced on Nhyira FM in Kumasi on Wednesday, “I bet you, Masawudu Mubarick’s picture will appear boldly on the ballot papers during the Asawase Constituency parliamentary election for 2020.”

He insisted that Masawudu is currently the ideal candidate for the Asawase seat and indicated that he (Masawudu) could increase NDC’s votes in the constituency, but “some people are working to destroy his ambition.”

Nana Wiafe, who claims to be very close to Masawudu, described the party’s decision as “bogus” and that the teeming supporters at Asawase would not accept the NDC executives’ verdict.

Fuming over the disqualification of Masawudu, he said the action taken by the NDC leadership clearly shows that the party was being managed by what he called “a bunch of hypocrites who prefer lies to the truth.”

According to him, Masawudu met all the conditions set by the party and was eligible to contest the seat at Asawase but “some people have secretly worked to disqualify him from the race.”

“The NDC leadership will hear from the camp of Masawudu in a grand style very soon. What happened at Asawase the last time was nothing, they will surely hear from us again,” Nana Wiafe threatened.

The Asawase executives of the NDC denied him nomination forms to contest in the party elections on grounds that he (Masawudu) has been suspended from the party.

Masawudu, who was determined to contest the elections, visited the Ashanti regional office of the NDC for the forms, and he later submitted the completed forms at the party’s headquarters in Accra.