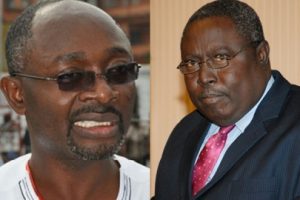 In his recent Citi News interview, Mr. Woyome, who is at the center of the 51 million Cedis judgment debt, accused Mr. Amidu, the former AG, of ordering part payment of the money.

Mr. Amidu, who’s in court seeking to examine Mr. Woyome on the repayment of the amount, has in his latest statement copied to Citi News, stated that Woyome’s claims ought to be ignored because they are false.

Woyome’s outbursts on Citi News and other radio stations appear to be contributions of someone who is mentally exhausted, extremely tired, and frustrated, and his comments ought to be ignored,” he stated. “I heard Alfred Agbesi Woyome, accuse me on Citi News on 24th November 2016 at the 5.30 pm news of having ordered or authorized the Ministry of Finance to pay him part of the GHC51.2million unconstitutionally looted by the incumbent Government for Woyome. I also heard him allege that I ordered or authorized a September 2011 payment of the loot which the Ministry of Finance paid to Woyome by transfer into his accounts.

These spurious allegations are untrue and symptoms of mental exhaustion and stress coming from the lootee of the public purse.” Oral examination Martin Amidu’s hope of orally examining Woyome over the GHc51 million judgment debt case was cut short after Mr. Woyome filed an application to challenge the Supreme Court’s earlier decision.

Mr. Amidu has however accused President Mahama of instigating Woyome’s application in a bid to prevent Woyome from blowing the cover of the incumbent National Democratic Congress (NDC). He also on Friday filed his affidavit to challenge Woyome’s application at the Supreme Court. Below is the full statement from Martin Amidu:

THE LOOTER GOVERNMENT AND THE LOOTEE WOYOME KNOW AMIDU HAD NOTHING TO DO WITH THE LOOTED PUBLIC PURSE: BY MARTIN A. B. K. AMIDU I heard Alfred Agbesi Woyome, accuse me on Citi News on 24th November 2016 at the 5.30 pm news of having ordered or authorized the Ministry of Finance to pay him part of the GHC51.2million unconstitutionally looted by the incumbent Government for Woyome. I also heard him allege that I ordered or authorized a September 2011 payment of the loot which the Ministry of Finance paid to Woyome by transfer into his accounts. These spurious allegations are untrue and symptoms of mental exhaustion and stress coming from the lootee of the public purse.

The fact that I had nothing to do with the authorizations written to the Ministry of Finance to pay any portion of the looted public purse to Woyome was already determined finally in the declarations made by the Supreme Court on 29th July 2014 against the looter Government represented by the Attorney General and the lootee Woyome with Austro-Invest Limited. The looter, the incumbent Government of Ghana, itself set up the “Commission of Enquiry Into Payments From Public Funds Arising From Judgment Debts & Akin Matters (2012/C.I 79)” of a sole Justice of its own choice. The independent Justice and his Commission found that I had nothing to do with the looted public purse.

I also heard Woyome speaking on his own behalf and on behalf of this incumbent looter Government accusing me of having something to do with interest payments on the looted monies which the Chief State Attorney Samuel Nerquaye Tetteh recommended through Amma Gaisie, the Solicitor General, to me in a memorandum dated 3rd November 2011 for approval and which I refused to approve with instructions that the matter be resolved in the Court. But the same Commission of Enquiry appointed by this very incumbent looter Government did not find that I had anything to do with the proposed interest payments as I was indeed the person who aborted that attempt further to loot the public purse.

The Commission specifically found and established that: “i. Either through inadvertence or pure mischief through connivance, both the Chief State Attorney, Samuel Nerquaye Tetteh who was charged with the defence of the suit in the trial court,…did not scrutinize the process filed before them with judicious eyes. …The bank accounts of Mrs. Nerquaye Tetteh, the wife of the Chief State Attorney, was later found by the Economic and Organized Crime Office (EOCO) to have ballooned by the payment into it of the sum of GHC400, 000.00 by Alfred Agbesi Woyome after the deal had become successful…”. (See page 3 of the White Paper whose findings and recommendations were reluctantly accepted by the looter Government at page 4 thereof). In addition to the decision and order of the Supreme Court dated 29th July 2014, the recommendations and findings of the Commission of Enquiry have become binding judgments of the High Court unless reversed under the Constitution. One would, therefore, have expected that if the lootee Woyome was not the surrogate of the incumbent looter Government, then the incumbent Government would have come to my defence because it accepted the Commission of Enquiry Report in a White Paper. Instead, in his interviews on television and radio, the President continues to accuse me of falsehood and goads Woyome and his Ministers on to insult me via the electronic media for defending the Constitution. It is clear where the incumbent Government’s support lies in the Woyome matter.

The lootee, Woyome, and the incumbent looter Government succeeded in their aim to do whatever it took for the Supreme Court to reverse its decision and order dated 16th November 2016 in preventing me from examining Woyome orally on oath on 24th November 2016. Woyome did not only file an application to discharge or reverse the order for his examination at 9.52 am on the 23rd November 2016. He followed this up by filing at 1.30 pm an application for the stay of proceedings to disable me from examining him the next morning.

It was not accidental that the Government which argued against my application to examine Woyome orally on oath on 10th November 2016 was this time round made the 2nd Respondent in surrogate Woyome’s applications. Common sense makes such tricks quite obvious to the ordinary person. Woyome’s outbursts on Citi News and other radio stations appear to be contributions of someone who is mentally exhausted, extremely tired, and frustrated, and his comments ought to be ignored.

However, the files on this loot of the public purse by the incumbent Government for its lootee and surrogate, Woyome, are in Government custody and one expects a dignified Government to have told the public by now that its surrogate is pathologically adverse to the truth, especially when he associates me with any payments of the looted public purse or any proposed interest. The incumbent Government knows this is untrue, as its own Commission of Enquiry has found. I have responded to similar spurious allegations of complicity in the loot in the media and on my website, martinamidu.com in the past, but the media and the public are being hoodwinked by Woyome’s outburst and the incumbent Government’s overwhelming silence to set the records straight. The fact remains that the people of Ghana are enduring economic hardships now because of this incumbent looter Government of the public purse. I entreat fellow citizens once more to read between the lines and come to their own justified conclusion that the only way the Republic and the people of Ghana can get their looted Woyome money back is to vote out this kleptomaniac looter Government and President on 7th December 2016.

My constitutional mandate has been to pursue the refund of the looted monies as ordered by the Court. But every single Ghanaian can also stand against the ongoing looting of the public purse. Use the representative democratic process and vote this looter Government out to have our GHC51.2million loot from Woyome back soonest after voting this President out on the 7th December 2016 elections. Citizens, you have a choice to make. How much longer will we hear stories of inadvertence, mischief and connivance by an incumbent Government that strips the Republic’s coffers bare so that ordinary Ghanaians must suffer financial hardship? PUT GHANA FIRST and let us get our looted money back by voting the incumbent looter Government out on 7th December 2016. Protect Ghana and the government purse by voting for a new President. Martin A. B. K. Amidu 27th November 2016