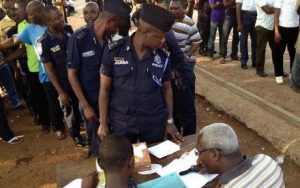 Some security personnel, Officials of the Electoral Commission (EC), the media and representatives of the political parties who could not cast their ballots on December 1 and 4, have now had an opportunity to vote.

Most of them had their names missing from the register of special voters but when they turned up at their original polling stations today December 7, they saw their names and were allowed to vote and return to their respective duty posts.

An elated police constable, who spoke to ultimatefmonline.com at the Wantania E /A polling station B, said there was no difficulty in going through the process stating that the Presiding Officer was also helpful.

Meanwhile, the list of missing names that characterized the special voting which was done in two folds was not witnessed at the various polling stations visited at the Walewale Constituency on Wednesday.