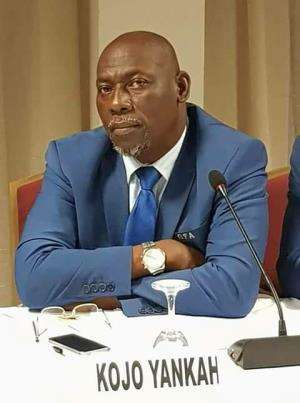 Western Regional Football Association Chairman, Kojo Yankah has questioned the relevance of the FIFA/CAF liaison team that has been appointed to lead Ghana football.

Football the premiering of the Anas Aremeyaw Anas documentary which has shaken the foundations of Ghana football, the High Court has appointed the Registrar of Companies as the official liquidator of the Ghana Football Association (GFA).

The court took the decision after it granted an injunction application by the Attorney General to restrain the GFA and all it assigns from carrying out any official work.

However, after several deliberations with FIFA and CAF, the Dr Kofi Amoah and Oti Akenteng have been appointed to lead Ghana football.

But the controversial football administrator has questioned the relevance of the team insisting FIFA only assigned the liaison officers to make sure that the various junior national teams don’t miss out on their impending assignments.

“The letter from FIFA on the two liaison officers doesn’t give them the right to organise football in Ghana. FIFA didn’t give them any mandate to call meetings and discuss football” he told Happy FM.

“Their job is to see to it that women’s U20 make it to the world cup and the men’s U-17 make it to Niger. How does this translate to them meeting with GHALCA asking them to write their problems to them.”

The outspoken football administrator also mentioned that government has no power and also no one outside football can run the globular leather in the country.

“Nobody outside football can manage football. Fifa won’t allow any football person to run the football.

“Government doesn’t have power over football but only the company situated in the country. Government can’t tell us what to do” He reiterated.