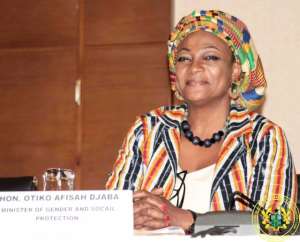 The Gender Minister Otiko Afisa Djaba has stated that the target to get women involved in the business sector and active in politics should be a reality by 2030.

She said empowering women is a key goal for President Akufo-Addo and his policies are geared toward achieving that.

Madam Djaba was speaking at the launch of the Gender and Development Initiative for Africa at the Accra International Conference Center (AICC), on the theme “African Women as Leaders in Business and Politics.”

She listed a number of the governing New Patriotic Party (NPP)’s policies including the Free SHS program, One District-One Factory, Planting for Food and Jobs and One Village-One Dam projects which she said, will “certainly provide a ladder to escape from poverty and deprivation for women”.

She specified these because “women have always formed a disproportionate percentage of the vulnerable in our society to empower citizens who contribute meaningfully to their own development and as effective partners in nation building”.

The MInister also stated that 54% of Livelihood Empowerment Against Poverty (LEAP) beneficiaries have been identified to be women and about 1000 of these beneficiaries.

Under the programme, she stressed how pregnant and or lactating mothers with children under one year are provided with skills training and start-ups to improve their consumption.

She also stated that the government is launching a ‘HeforShe’ Campaign in December to garner the support of males for the campaign of more effective gender equity.

She mentioned the controversial Affirmative Action proposal as one of her Ministry’s upcoming projects as well.

“The Draft Affirmative Action Bill has been sent to the AG’s Office to be prepared for Cabinet Approval and submission to Parliament before it rises this December”, she said.

She also stated that the Domestic Violence Secretariat is embarking on 16 days of Activism against gender-based violence from November 25 to December 10, 2017.