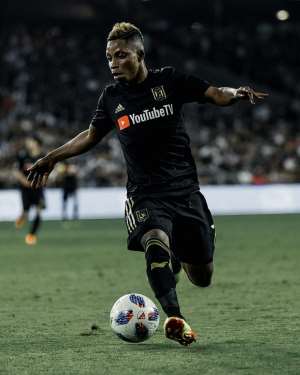 Ghanaian winger Latif Blessing was in inspiring form as Los Angeles FC draw with LA Galaxy in the MLS.

The former Liberty Professionals schemer was a handful for the Galaxy defense with ex-Chelsea defender Ashley Cole struggling to keep up with the Ghanaian’s pace.

Blessing played 81 minutes of the game with LAFC leading by two goals. A minute after leaving the pitch LA Galaxy pulled one back.

Carlos Vela and Lee Nguyen scored in the first half for LAFC, but Romain Alessandrini responded for Galaxy in the 82nd minute. Ola Kamara then pounced on a terrible back pass by Andre Horta, a 21-year-old Portuguese designated player making his LAFC debut, to complete the fightback.

Kamara rounded goalkeeper Tyler Miller and tapped in the empty net to ensure a share of the spoils in another lively edition of the Los Angeles derby already dubbed ‘El Trafico.’