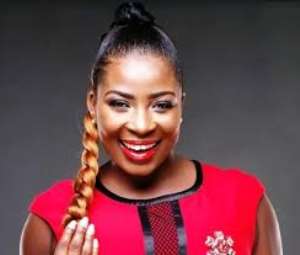 Controversial actress Xandy Kamel has been trending in the news for some days now for doing extremely bold things. She first of all came out to say that most married women sleep with their trainers. This issue went viral with lots of people coming out to share their opinion on the topic.

That did not end there, Xandy again removed her panties during a live interview on Kofi TV. Lots of Ghanaians did not take her action too well. People lambasted her on social media for doing that on TV. She did that after she was asked to prove a statement that most of the sex scenes in movies were not real.

One of the people who did not take her actions well was her colleague actress Gloria Sarfo. Gloria slammed Xandy for what she did and added that Xandy was drowning the image of players in the industry.

The “Living with Trisha” star described Xandy’s act as ‘Nonsense’ and added that it must stop because it tarnishes the image of those in the industry, and that she won’t keep quiet about it.

Xandy didn’t take the reply of Gloria too well.

Read the exchanges between the two actresses below;