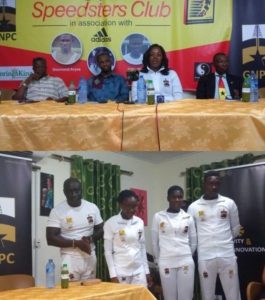 The Club, which is an offshoot of the Ghana’s Fastest Human (GFH) is preparing three Ghanaian youth for future athletic competition at both local and international levels.

The GFH competition started in 2013 with the aim of reviving the sprint race in Ghanaian athletes and to also prepare them for the Olympic Games in 2020.

Gifty is the fastest in the 100 and 200 metres categories, while Ida over the years has taken part in all GFH competitions since its inception in 2013, whereas Desmond was crowned the fastest University Student in all of Africa by winning the 100 metres at the All African Universities Champions, held in South Africa this year.

The trio, would be camped for one year, and would be placed on special diets, muscles development exercises and psychological development.

Mrs Carmen Bruce-Annan, the Corporate Affairs Manager of the GNPC said: ‘We are excited because we are seeing the first fruits of the Ghana’s Fastest Human competition.”

“GNPC is very proud to be sponsoring the Ghana’s Fastest Human competition and we believe it’s one of the things that have a strategic and a long term view of bringing the glory days back to Ghana’s Athletics.

“It’s our target to have the best of the best joining the GNPC Speedsters club from the Ghana’s Fastest Human competition,” she stated.

“We hope Speedsters Club will also go on to improve our performance in athletics in future competitions,” she added.

Mr Reks Brobbey, GFH Founder Ghana said a team of professionals had been put in place to train the trio for excellence.

“It has never been done before and we are very excited at the prospects,” he said.

He said they were very confident that at the 2020 Olympic Games in Tokyo, Ghanaian contingents would improve upon their performance and come home with medals.

Mr Marc Dzradosi, a Member of the Ghana Athletics Association, urged corporate Ghana to support the development of athletics in the country.

“It is not only government that supports the growth of sports and so a little help from corporate entities will boost its growth,” he said.

Mr Saka Acquaye, Deputy Director General – Technical Division of the National Sports Authority, who chaired the function, urged the trio to make good use of the opportunity offered them and put up their best.

The GNPC was established by the GNPC Law 1983 (PNDC Law 64), with the primary object of undertaking the exploration, development, production and disposal of petroleum.

GNPC started operations in 1985.
The Corporation is an anchor partner in all upstream operations and currently has stakes in 18 Petroleum Blocks and is the Operator of the Voltaian Basin.