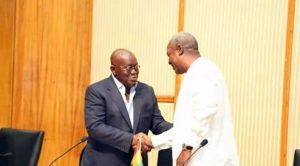 The outgoing John Mahama-led administration will Wednesday morning present its handing over notes containing details about the state of the nation to the incoming New Patriotic Party (NPP) government.

The Transition Team, jointly inaugurated by President Mahama and president-elect, Nana Akufo-Addo, is expected to sit for six weeks from Wednesday.

The meeting will afford the incoming government the opportunity to enquire about matters of national interest from the Mahama administration.

The transition team will meet at 10 a.m. Wednesday at the International Conference Centre to set up the Transitional Committee comprising those of the incoming and outgoing teams.

There would also be the transitional sub-committee on finance, energy, infrastructure, social services, the presidency, etc, presenting their handing over notes to representatives of the incoming administration.

The spokesperson for president-elect Nana Akufo-Addo, Mustapha Hamid, said Tuesday once his team gets the notes they would scrutinise it and ask further questions for clarity as this would be the basis for proceeding on anything.

“Certainly there would be questions that we would need clarifications on, and those questions would be the basis for meetings…we already have a lot of information from various ministries and government agencies and we hope that the notes that we would be given would be consistent with some of the things that we know. Where there are inconsistencies we would ask questions,” he said.

Mr Hamid does not expect any hiccups past transitions have experienced if the teams work with honesty, openness and transparency as said Nana Akufo-Addo said.

He stressed that past traditions did not have a law governing them, unlike the current system where there is a law governing the process adding he has “no doubt this would be arguably the smoothest transition process we are likely to have.”