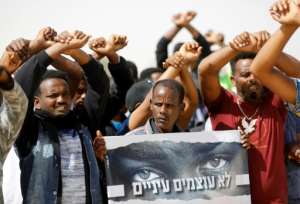 African migrants protest on February 22, 2018 outside the Saharonim Prison, where at least nine others have been incarcerated as part of Israel’s policy of prison or deportation for migrants. By MENAHEM KAHANA (AFP)

Hundreds of African migrants protested Thursday outside an Israeli prison where at least nine others have been incarcerated under Israel’s controversial new policy of expelling or imprisoning them.

They marched a short distance from the Holot open detention centre to Saharonim Prison, chanting slogans and carrying signs demanding the prisoners’ release.

They said they were on a hunger strike and vowed to continue it until a solution is reached.

Israel is preparing to deport thousands of Eritreans and Sudanese who entered the country illegally and who do not have asylum claims under examination.

The government has offered them a choice: leave by early April to their homelands or a third country, or face indefinite detention in prison. 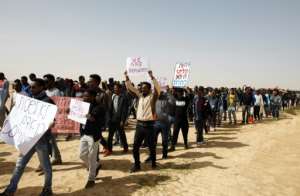 African migrants march from Holot to the Saharonim Prison on February 22, 2018 to protest at the imprisonment of several migrants under a controversial Israeli policy of detention or expulsion

As many could face danger if returned to their home countries, Israel is proposing to send them to an unnamed third country, which migrants and aid workers say is Rwanda or Uganda.

Israel plans to start by tackling the cases of single men who have not submitted asylum applications, or whose applications have been rejected.

Authorities on Tuesday transferred the first Eritrean detainees, detained at the Holot open detention centre, to Saharonim Prison after they refused to leave the country.

Israeli authorities said nine had been jailed, while migrants said the number was 12.

Hundreds of detainees at the Holot centre went on hunger strike Tuesday night in protest at the move.

Clasping their hands over their heads, protestors on Thursday chanted: “We are not criminals, we are refugees! No deportation, no more prison, we are not for sale, we are asylum seekers! Bring back our brothers!” 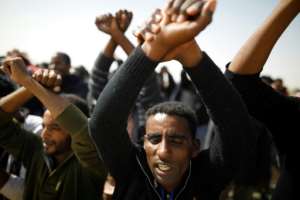 African migrants protest outside the Saharonim Prison on February 22, 2018, after announcing a hunger strike over Israel’s policy of prison or deportation for migrants

Muluebrhan Ghebrihimet, a 27-year-old Eritrean, said that when he arrived in Israel six years ago, he had filed an asylum application, but it was rejected.

“We are here to seek asylum, not to work or become rich,” he said.

He did not know when he would be sent to prison.

A wave of African migrants arrived in Israel after 2007, crossing the border from Egypt’s Sinai Peninsula.

The porous border has since been largely sealed off, putting an end to arrivals.

Migrants settled in the poor neighbourhoods of southern Tel Aviv, the country’s commercial capital, but their presence has caused friction with some Israelis.

Religious and conservative leaders, including Prime Minister Benjamin Netanyahu, have presented Muslim and Christian migrants as a threat to Israel’s Jewish identity.

The government, considered the most rightwing in Israel’s history, has been roundly condemned by the United Nations’ refugee agency, academics and rights groups over its migrant plan.

According to interior ministry figures, there are currently some 42,000 African migrants in Israel, half of them children, women or men with families, who are not facing the April deportation deadline.

Israeli officials stress that no one they classify as a refugee or asylum seeker will be deported.