BREAKING NEWS
GMT+2 10:52
Home Politics If NDC founder is not campaigning for them, something must be wrong- Mrs Rawlings suggests

If NDC founder is not campaigning for them, something must be wrong- Mrs Rawlings suggests 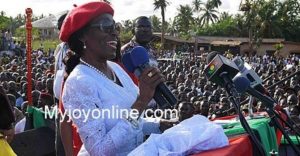 The longest serving first lady in the history of Ghana, has given a faint clue that her husband may not play any role in the campaign of the governing National Democratic Congress.

Speaking to Joy News Nana Konadu Agyemang Rawlings said the fact that her husband Jerry John Rawlings who is founder of the NDC is not campaigning for the governing party speaks volume of what is likely to happen.

She made the comment minutes after she secured a historic opportunity to be the first woman to contest as president, at least in the fourth Republic.

She was answering a question as to whether her husband will join her and the National Democratic Party on the campaign trail ahead of the December elections.

There have been strained relationship between Mr Rawlings and officials of the party he foundered following claims he was being hounded over $5 million gift he received from Nigeria’s Military leader Sani Abacha.

But for a terse appearance at the launch of the NDC manifesto in Sunyani, the ex-president has been conspicuously missing at all campaign activities of the governing party giving rise to speculations he will not play any role in this year’s elections.

If what Mrs Rawlings said in the interview with Joy News’ Dzifa Bampoh is anything to go by, then Mr Rawlings may not be seen campaigning at all for president John Mahama.

She will not also confirm if her husband will campaign for her with just 27 days to go for the election.

Glass ceiling
Having missed the opportunity to contest in 2012 and nearly hit the snag again in 2016, Mrs Rawlings finally got on the ballot, the first woman to contest the highest position of presidency, at least in the fourth Republic.

Mrs Rawlings said she is happy to be breaking the glass ceiling for women to be active participants at the highest level of the country’s development agenda.

“Taking part in this election is important for me because it opens the door for women, and for all to see women as activist part of the development of the country,”

She said her place on the ballot is victory is for women, victory for the youth and for everybody who felt disenfranchised when she was disqualified for the second time.

“It is an opportunity to showcase what we have as NDP,” she said with confidence, promising a “robust economy” if voted for in the 2016 elections.

Successful campaign?
Nana Konadu Agyemang Rawlings said but for the troubles she had with the Electoral Commission, and an apparent media blackout, her campaign has been on track.

“We are doing things on the ground but have no publicity,” she said, adding due to the high cost of Parliamentary fees her party had to reduce the parliamentary aspirants contesting the elections.

“We have aspirants all over the country but have pruned down to a number we can manage,” she stated.

She said if she wins the elections her presidency will look at competence, not party affiliation in the formation of government.

Clinton defeat
Having received Hillary Clinton in Ghana in the year 2000 during president Bill Clinton’s historic visit to Ghana, Mrs Rawlings said she has some fond memories about the Senator who lost out in the US election.

However, she said her style of campaign is markedly different from that of Hillary Clinton.

I do things differently. I appeal to ordinary Ghanaians, and to women, hinting she may churn out a good result in Ghana’s election.

Nana Konadu Agyemang Rawlings in one of seven people contesting the elections.