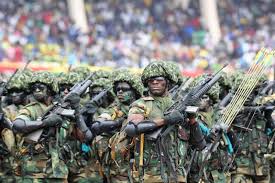 Soldiers disrupted a news conference convened Friday afternoon by a group excited over the removal of Rockson Bukari as Upper East Regional Minister.

The presser was just about to start when a Land Rover Wolf (a military vehicle) screeched to a sudden halt on the asphalted Commercial Street in Bolgatanga, the regional capital. The armed forces, close to 10 in number, lost no time in jumping out of the vehicle and, each holding long canes, raced into the press confab crowd.

Suddenly, the crowd dispersed in separate ways as the troopers chased after everyone haphazardly. Information gathered by Starr News indicates the security agencies took that measure to avert a possible clash in the capital after picking up intelligence that another group loyal to the reshuffled minister was massing up at a venue not far from the Commercial Street to counter the action led by the anti-Bukari faction.

The chaotic twist to the Commercial Street conference saw journalists assigned to cover the event join the fleeing conveners in shedding some calories against their will as everybody dived for refuge.

Whilst some bolted into a nearby yard of the Barclays Bank and joined an ATM queue (without any ATM cards on them) just to hide from the soldiers, some took shelter inside nearby shops doing compulsory shopping and a few, who had nothing to do with Rastafarianism, ran into a popular Rastafarian hangout along that street where they could flick their fingers and sway their heads without dreadlocks to some reggae rhythms so the fuming soldiers would not suspect they were among the runaway participants.

“But is this necessary? Is it necessary to thank the President for removing somebody from office? Now, look at what is happening,” yelled a client in the Barclays Bank’s yard. He looked grown and was very unhappy about the commotion in the street.

Such was the speed at which newsmen fled the scene that if Friday’s night was a Radio and Television Personality (RTP) Awards Night and there was anything like “Best in Crossfire Flight Category”, it would be difficult to determine which of the ‘able entrants’ from the Upper East region should go home with the trophy.

Rockson Bukari himself, who has always described the media as “makers of modern minds” at every public function, would realise some of his ‘treasured’ newshounds can also be ‘chasers of golden boots’ if he watched the video of Friday’s aggressive flight.

After the soldiers had left, those who had disappeared returned from different routes to the scene, walking cautiously and palpitating. As they were mocking one another in the face, and rhetorically asking “Who say man no dey?” whilst nodding their heads with a smile, the military men emerged again from nowhere, more in number than before. And this time, the escape speed was far more than what is usually seen when a mob is desperately chasing a bird or a ruminant on the eve of a very important religious festival.

Two local drummers’ groups, who were engaged by the conveners to entertain the crowd after the event, also vanished from the spot. The directors of music, who spotted the soldiers first, did not notify their musical bands ‘terror’ had arrived. They fled first and their subordinates, putting their musical instruments aside, followed, outrunning everybody in their traditional costumes.

It is unlikely the entertainment bands would demand any money at the end of the day from the group that engaged them as the soldiers did not allow them to perform. And if they had received any cash ahead of the event, which never took place, they would either have to refund it or perform free of charge at any function (a naming ceremony or a wedding occasion) the group might have in the future.

The soldiers disappeared once more. But minutes later, they came back with some police officers and walked in silence through the street to an unknown location. As the up-and-down movement of the security officers became more unpredictable, some panic-stricken civilians who were still hanging around to see whether the stillborn press conference would still take place or not finally advised themselves by leaving the area quickly through ‘unapproved routes’. Even the proposed spokesperson for the group, who had boisterously accepted the task to read the press statement aloud, took to his heels in a smock before everybody, willingly leaving behind his new “spokesperson” title for anyone who might be interested in it.

Group sneaks out Press Statement on the outskirts

Dispersed but not dismantled, the determined leaders of the anti-Bukari faction still managed to meet the media at a faraway place and handed out to them copies of the statement which they had wished to deliver in front of followers who were in white headbands and displaying some placards before the sudden military raid disrupted the rally.

“Mr. President, we are happy you are not ‘a dead goat’ President like the NDC. We are proud of you because you are not the ‘Yen tie obiaa’ President. You have demonstrated that you are a leader with good listening ears. We hope your action will send a strong signal to those appointees who have suddenly become so pompous in oblivion about the toil and sweat of the grassroots.

“The future of NPP in the region is now very bright. We, therefore, formally congratulate Her Excellency Tangoba Abayage Paulina [on] her appointment as the Upper East Regional Minister-designate. Upper East is elated about your appointment,” the statement said.

Aware some people are opposed to his style of leadership, the Regional Minister has always said he is disliked by a section of the people in the region because he wants “the right thing done” regardless of the political shades anybody involved in “any wrongdoing” belongs.

Mr. Bukari, the first Bolgatanga Municipal Chief Executive, was reassigned Thursday as a Minister of State at the Presidency 18 months after he assumed office as Upper East Regional Minister. He is the first person to take over the region’s highest political office after 8 years of rule by the now-opposition National Democratic Congress (NDC) and he is the first politician in the region to be succeeded by a woman as Regional Minister.

His supporters have indicated they will come up with a statement soon to thank President Nana Addo Dankwa Akufo-Addo for “elevating” him to the level of a “cabinet minister”.