Kweku Adoboli to be deported from UK

Kweku Adoboli, the former UBS trader who was sentenced to seven years in prison after running up the largest unauthorised trading loss in UK history, is on the verge of being deported to Ghana.

The 38-year-old, who caused a $2.3bn trading loss by vastly exceeding his risk limits, has lived in the UK since he was 12 but is a national of Ghana, where he was born and where he lived until he was four years old.

On Monday, he is due to report to the Home Office for a check-in and could be detained then. He has exhausted almost all his legal options since his release from prison into probation three years ago, after serving half his sentence.

“Being banished from your friends, family, community, country and the West is by far the worst punishment that can be enforced upon someone,” Mr Adoboli said.

“I fear it is something that nobody can ever truly recover from.” Earlier this week, a court denied him permission for a judicial review of the deportation proceedings, and granted a request by the Home Office to allow it to deport him even if he renews his application for a review.

“The current challenge is very substantially out of time,” Justice Peter Lane said in the ruling. He called the “nature and timing” of the motion “an abuse of process on the part of the claimant”. 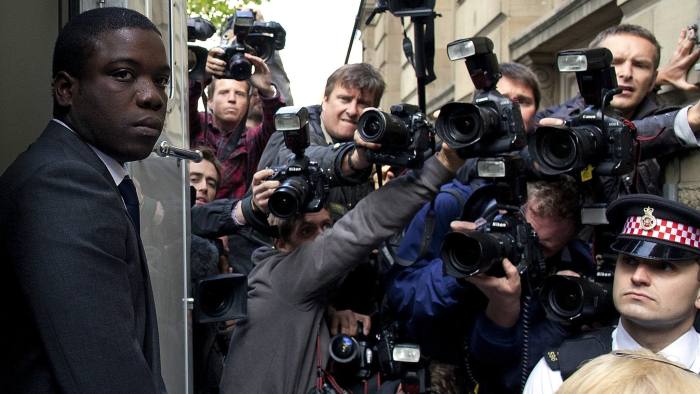 Under British law, foreign nationals who are sentenced to longer than four years in prison are automatically subject to being deported, unless they can argue that there are compelling reasons to allow them to stay in the country.

In late June, the UK Court of Appeal refused his application to appeal against an immigration tribunal ruling that upheld his deportation. Lived in UK since he was 12 Mr Adoboli left Africa when he was four to join his father, who worked for the United Nations, in the Middle East.

He was sent to a boarding school in the north of England when he was 12 and has lived in the country ever since. He studied at Nottingham university and then joined UBS, where he worked until his arrest in 2011.

“Kweku has already paid a heavy price for a non-violent crime and represents no threat to society,” said his lawyer, Jacqueline McKenzie. “The idea that someone settled in the UK, particularly from a young age, could be removed to a country they barely remember is plainly wrong.”

Under a deportation order, Mr Adoboli would not be allowed to re-enter the country as a visitor potentially for the rest of his life, and he would also likely be barred from entering Europe, North America and other countries, she said.

“This is something that a civilised country should not be supporting on the facts of this particular case,” she added.

Close family ties to UK Mr Adoboli’s lawyers are working on several last-ditch applications in an effort to keep him in the UK, including a so-called “fresh claim”, with the Home Office, which is an application that argues there are new reasons since the original order to deport was made that justify keeping a person in the country.

He said he was planning to launch a campaign via CrowdJustice.com to raise funds to help pay his legal bills.

He argues that his close friends and family ties to the UK — he lives with two of his godchildren, who he helps care for — and his efforts to contribute to a discussion on how to prevent similar crimes, along with the fact that he is at low risk of re-offending and is non-violent, mean he should be granted permission to stay.

Mr Adoboli was found guilty in 2012 after a 10-week trial at Southwark Crown Court, London. The case, which came at the height of public anger towards bankers following the financial crisis, was seen as emblematic of excessive risk-taking in the finance industry.

He was convicted of two counts of fraud for abuse of position, including one count relating to the unauthorised trading losses, but acquitted on four counts of false accounting.

During the trial, prosecutors sought to paint him as reckless gambler who cared only about earning a large bonus.

He argued that the bank put excessive pressure on young and inexperienced traders, had ill-defined risk controls, turned a blind eye to his tactics when his trades were profitable, and that his only motivation was to make money for the bank.

Advocate of banking reform Since his release, Mr Adoboli has spent his time speaking to audiences ranging from students to business executives on banking and leadership reform, and how to prevent a repeat of his actions.

That includes addresses to a Financial Times business conference and to members of the FT 125 corporate learning forum. For more than a year now, he has been working with the Forward Institute, a non-profit that aims to improve public trust in institutions.

Adam Grodecki, an executive director there, said they have seen “growing interest from major organisations” over the past year who want to hear the former trader’s thoughts.

“In our experience, little has more impact than someone talking candidly about their mistakes,” Mr Grodecki said. “Unfortunately, very few people are willing or able to do this. Kweku does it with rare generosity and insight. Nothing can replicate the impact of him helping others learn from his mistakes, in person and in detail.”

Andy Wightman, a member of Scottish Parliament who represents the constituency where Mr Adoboli lives in Edinburgh, urged Sajid Javid, the home secretary, in a letter on Thursday to allow Mr Adoboli to stay in the UK.

He “is more British than foreign”, Mr Wightman said. “He has paid a heavy price for his wrongdoings but to deport him now would be a disproportionate double punishment . . . Considering the work he has done over the past three years, Kweku is an asset to society and should not be removed in pursuit of a hostile environment policy that has already proven itself to be cruel and unjust.”