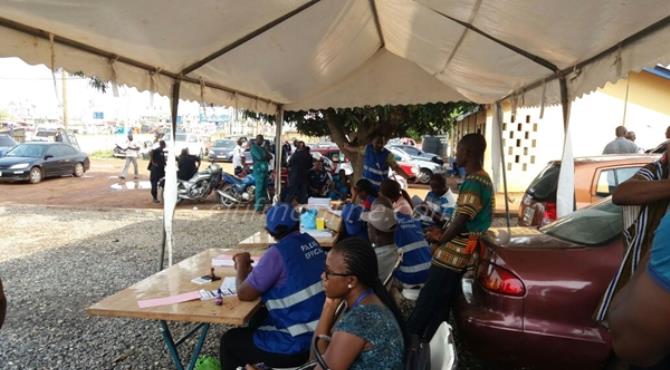 The second phase of the special voting exercise is currently underway in all designated polling stations across the country.

The first day of the special voting exercise on Thursday, December 1, recorded a turnout rate of 72.69 percent representing 92,231 of 126,875 registered persons, according to provisional figures from the Electoral Commission (EC). He said in the Ho constituency specifically, 771 voters are expected to exercise their franchise. Norbert said the exercise started in Ho Central at 7 am this morning and so far 10 people have cast their ballot.

The returning officer, Moses Gemeh told Citi News the process has so far been smooth and calm with all the necessary logistics available.

He however said two cases of missing names have been recorded. These people, according to him, came to the polling station but could not find their names in the list.

Ashanti Region
Citi News’ Ashanti Regional correspondent who was reporting from the Nhyaieso constituency, Hawa Iddrisu said the EC is expecting about 353 voters to cast their ballot but was quick to add that only 25 had been able to register.

According to her, about three officials could not vote because their names are not on the register though they returned to their original constituencies to cast their ballot. “They were sure that their names were suppose to be on the register  but it surprises them that this is second time they are coming meaning they cannot vote.”

Central Region
In the Central Region, a police officer who travelled from Sunyani in the Brong Ahafo Region to his original constituency, Saltpond could not find his name in the register. “I was here the last time and they said my name was not in the register so I went back and they asked me to come and vote today. I was here and I still cannot find my name in the register.I spoke to the EC officer and he told me that it is a general problem but I don’t understand.”

Northern Region
Citi News’ Northern Regional correspondent, Karim Nagtogmah who was reporting from the Tamale Central constituency said majority of police officers who visited the polling station to vote were turned away because they were not at the original constituencies where they registered.

“It appears majority of the security personnel who have come here have been turned away. With assurance that those who could not exercise their franchise last Thursday will be given the opportunity to vote today, they have come only to realise that they have to get back to the original areas or centres or constituencies where they registered in 2012.”

Speaking to Citi News, the NDC Tamale Central Constituency Secretary,Mohammed Hafis said some of them failed to obey the EC’s instruction hence the reason why they are being turned away.