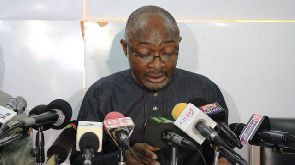 Businessman Alfred Woyome has said the Supreme Court erred in its judgment concerning the controversial GHS51.2million judgment debt, adding that although he is “determined” to pay the money back, he is doing so “under duress.”

“I am paying back the money under duress. I feel that my rights are been trampled upon and feel persecuted,” he told journalists at a press conference in Accra on Friday, November 18.

According to him, his rights are being trampled upon and reiterated his disagreement with the Supreme Court.

Mr Woyome also refuted claims by former Attorney General Martin Amidu that a GHS4million cheque he issued as part payment for the judgment debt, was a phoney cheque concocted by the government to hoodwink Ghanaians.

“…I don’t think I here, as a citizen, proud one of course, will try to play a prank on fellow Ghanaians. No, not at all! The so-called cheque was written by me. I made a cheque without writing who it’s meant for because I was confused as to who should be the recipient and after a meeting with the Attorney General in the presence of the Solicitor-General ….”

On Thursday, Mr Amidu said the Government of Ghana concocted the GHS4million part payment story and the cheque.

“Does the Ghana government believe us to be so easily fooled that they concoct Woyome part payments of the judgment debt as smoke and mirrors for their election campaign? The people of Ghana should demand to know from government how its Attorney General can – in enforcing the order of the Supreme Court for Woyome to refund the unconstitutional payments made to Woyome to the Republic of Ghana – accept a cheque of GHS 4,000,000.00 drawn by Woyome dated 4th November, 2016 in favour of the Economic and Organised Crime Office as part payment of the monies ordered by the Court to be refunded, Mr Amidu said in a statement.

Mr Amidu has also said only a new government can retrieve the GHS51.2 million fraudulently paid to Mr Woyome.

He has, therefore, called on Ghanaians to vote against President John Mahama and the governing NDC in the December 7 polls.

“I am a senior and foundation member of the NDC, the Governing party. But I am compelled to put Ghana first and to defend the 1992 Constitution by saying that the only way Ghanaians can have the Woyome/Austro-Invest joint loot refunded is to change the Government that created, looted and shared the loot with them during the presidential election this year,” Mr Amidu said in a statement copied to ClassFMonline.com.