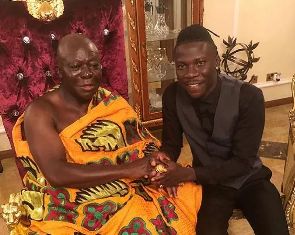 Stonebwoy, at the premises of the Ashanti King, was seen dancing Adowa, a popular dance that is widespread among the Akan people and is performed during funerals and public social events.

According to reports, the ‘Hero’ hitmaker was part of a powerful delegation from Zylofon Media which joined the Asantehene and his people to celebrate the Akwasidae, a festival observed by the people of Asanteman.

However, Stonebwoy in an interview with Accra-based Joy News recently indicated that he was never going back to Zylofon Media for reasons best known to him.

The artiste stated emphatically that he was done with the label and nothing was going to make him go back.

But Stonebwoy was seen with the Zylofon Media entourage that visited the palace of the Asante King in Kumasi.