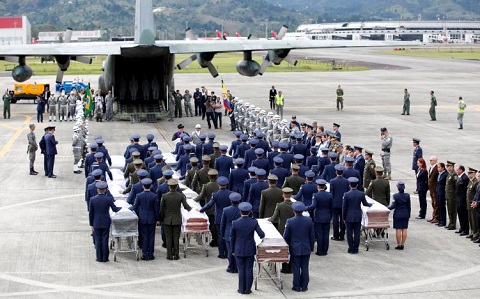 Military personnel unload a coffin with the remains of Brazilian victims who died in an accident of the plane that crashed into the Colombian jungle with Brazilian soccer team Chapecoense, at the airport from where the bodies will be flown home to Brazil, in Medellin, Colombia December 2, 2016. REUTERS/Jaime Saldarriaga 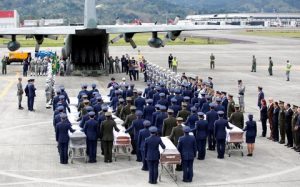 Military personnel unload a coffin with the remains of Brazilian victims who died in an accident of the plane that crashed into the Colombian jungle with Brazilian soccer team Chapecoense, at the airport from where the bodies will be flown home to Brazil, in Medellin, Colombia December 2, 2016. REUTERS/Jaime Saldarriaga

Dozens of coffins carrying those killed when a plane flying Brazil’s Chapecoense soccer team crashed into a Colombian mountain were loaded onto Brazilian air force planes for their final journey home on Friday.

The disaster on Monday killed 71 people and shocked soccer fans the world over. The LAMIA Bolivia BAe146 airliner apparently ran out of fuel, lost electrical power and was preparing for an emergency landing when it crashed.

Only six people survived, including three members of the soccer squad en route to the Copa Sudamericana final, the biggest game in its history.

The tragedy plunged Latin America’s largest nation, Brazil, into mourning as it reels from a deep recession and political crisis.

A convoy carrying the 64 dead Brazilians made its way from a funeral home in the Colombian city of Medellin to Rionegro airport, where coffins were solemnly accompanied into the bellies of the planes by a military honor guard.

The remains are scheduled to arrive early on Saturday morning for funeral services in Chapeco, the club’s small farming hometown in southern Brazil.

Temporary structures in the team’s stadium will shelter the coffins of players, staff and journalists for an open-air wake.

Some 100,000 fans, about half the city’s population, are likely to attend, as is Gianni Infantino, president of world soccer governing body FIFA. Brazilian President Michel Temer will attend a ceremony at the Chapeco airport after the coffins arrive, but he will not be at the wake in the stadium, his office said.

The pilot’s father-in-law, Roger Pinto Molina, apologized to the Brazilian people, after the publication of documents from Bolivian aviation authorities showing the airline ignored advice to use an alternative flight plan.

“We want to say to millions of Brazilians, especially the families, sons, parents and brothers in Chapeco that we are very sorry,” Molina, a former Bolivian senator living in exile in Brazil, told GloboNews.

The mood in Chapeco was subdued on Friday as some schools resumed classes, but city hall remained officially in mourning. Dozens of fans continued a vigil at the Chapecoense stadium as an impromptu shrine continued to swell with fresh flowers and handmade posters.

The bodies and ashes of five Bolivian victims of the crash left Colombia on a Hercules aircraft on Friday. Those of a Venezuelan victim were sent home on a commercial flight and the remains of a Paraguayan victim left Colombia late on Thursday.

Two black boxes from the crash site on a muddy hillside in wooded highlands near the town of La Union will be sent for examination by experts in Britain, where the jet was manufactured.

He can be heard telling the control tower the plane was “in total failure, total electrical failure, without fuel.”

Quiroga requested urgent permission to land before the audio went silent. Air traffic control had asked him to wait while another flight made an emergency landing.

The plane circled for about 16 minutes from its first communication with the tower until the crash, officials said. International flight regulations require aircraft to carry enough reserve fuel to fly for 30 minutes after reaching their destination.

The official urged the airline to come up with an alternative route because the journey of 4 hours and 22 minutes was the same length as the plane’s maximum flight range. The reports said the official, whom Reuters could not reach for comment, did not have the power to stop the flight.

A Colombian civil aviation document seen by Reuters confirmed the flight time was set to be 4 hours and 22 minutes.

LAMIA Chief Executive Officer Gustavo Vargas on Wednesday said the plane had been correctly inspected before departure and should have had enough fuel for about 4-1/2 hours. In such situations, he said, the pilot decides whether to refuel.

The father of Chapecoense defender Filipe Machado was among the relatives criticizing the pilot.

“He should have known that there was not enough fuel. So why did that idiot not stop to refuel?” Osmar Machado told GloboNews.