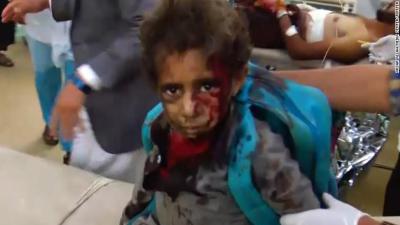 Dozens of children, most believed to be under the age of 10, have been killed after a Saudi-led coalition airstrike hit a school bus in northern Yemen Thursday.

The bus was hit as it was driving through a market in the rebel-held province of Saada, according to the Houthi-run Al-Masirah TV.

The children were on their way to summer camps, Yahya Sha’em, head of the Houthi-held health office in Saada told CNN.

The International Committee of the Red Cross said it was sending supplies to ICRC-supported hospitals to support an influx of casualties.

The Saudi-led coalition called the airstrike a “legitimate military operation,” and a retaliation to a Houthi ballistic missile that targeted the kingdom’s Jizan province on Wednesday night, according to Saudi Arabia’s official news agency.

“The targeting that happened today in Saada province was legal military action to target elements that planned and executed the targeting of civilians in the city of Jizan last night, killing and wounding civilians,” the Saudi Press Agency cited official coalition spokesperson Turki al-Maliki as saying.

One person was killed in that attack, Saudi state media reported.

Houthi media broadcast gruesome footage appearing to show the dead bodies of children. Other footage showed a young boy carrying a UNICEF backpack being escorted to a hospital, his face bloodied as medical staff tried to treat his injuries.