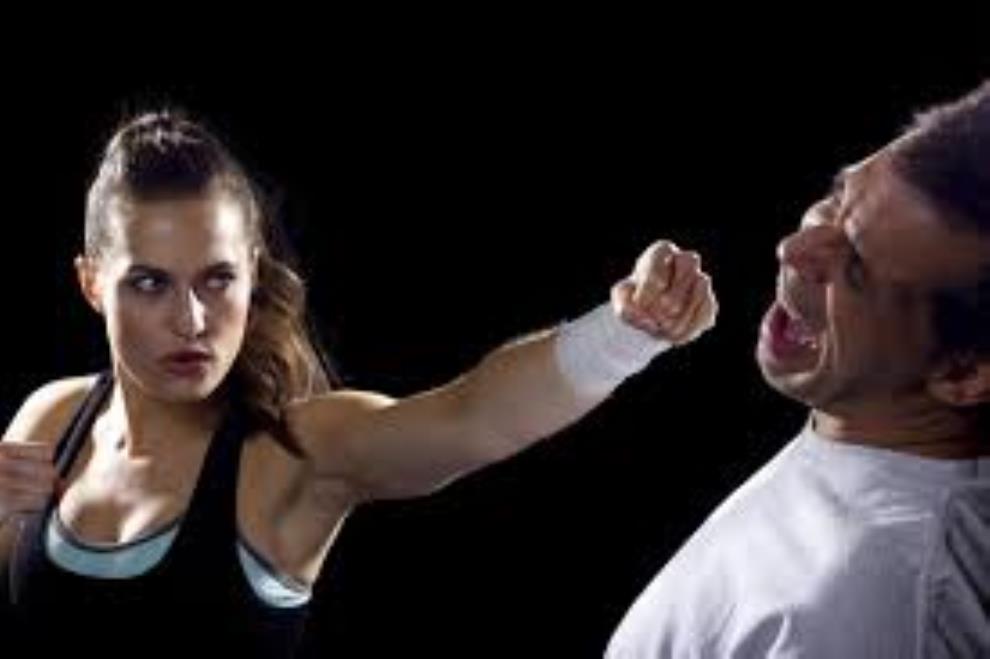 Posted By: adminon: May 21, 2018In: Life StyleNo Comments
Print Email 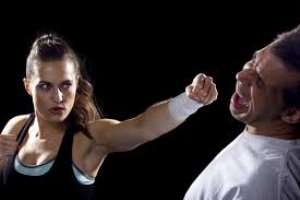 Move #1: Straight punch
If someone is in front of you and you’ve ID’d him or her as a threat (read: you’ve used verbal communication to try to get this person out of your personal space, or his or her hands are on you), a straight punch can be very effective.

Push from the ball of your foot and thrust your hip and fist forward at the same time, which will maximize your strength, says Campbell. “Really drive from the ground, and don’t let your elbow flip up; your contact area should be the pointer and middle finger knuckles, not your ring and pinky finger knuckles.” Also, keep in mind that aiming your punch for a vulnerable area—for example, your attacker’s eyes, nose, or throat—will be most effective, says Campbell.

Move #2: Front kick to the groin
Similar to the straight punch, the front kick to the groin is a powerful move to a vulnerable spot that can help you go on the offensive, says Campbell. To deliver this kick, drive your hips forward with your knee bent and heel back, then extend your knee and leg with force, making contact with your attacker’s groin area with the top of your foot (the area where your shoelaces are, if you’re wearing running shoes). Practice lunging to strengthen your legs for this move.

“Imagine that your kick could travel through the attacker’s groin and out the top of his or her head,” says Campbell, “as if you were going to split that person in two from the groin up.” After you’ve kicked, recoil your leg back to its original position as quickly as possible. “This strike can give you enough of an opportunity to get away, or might catch your attacker off guard so that you’re able to deliver a few more blows to other vulnerable areas, such as the eyes, ears, or throat, to finish the fight,” she says

Move #3: Knee kick
If the person is close to your body, the attacker may be too close for you to throw a straight punch. If that’s the case, kicking with your knee can be very effective, says Campbell. “Use this if someone is in front of you, inside your personal space, and powerfully drive your knee straight up to hit the groin of your attacker,” she says. Keep in mind you want to use the bony tip of your knee, not your thigh—this will cause more pain. If possible, before you throw the knee kick, try to grab your attacker between the person’s neck and shoulders, and hold on to as much skin, muscle, or clothing as possible. This will give you more leverage to knee-kick harder.

Move #4: Bear hug defense
If your attacker tries to “bear hug” you—a common type of move when it’s a male attacking a female, says Campbell, where the attacker grabs his victim from the front or behind around the shoulders—your first reaction might be to grab his elbows to try to pry arms away from your body. However, your best defense is to drop as low as you can toward the ground and squirm as much as you can to wriggle out of your attacker’s hold, advises Campbell.

“Think about how a cat would respond if you put it in a tub of water,” she says. “You want to act like that cat—be as difficult as possible to control.” Lowering your center of gravity has another big benefit: It makes you more stable and harder to lift, and it gives you a new angle from which you can knee-strike, groin-kick, or throw a punch or elbow to your attacker’s eyes, throat, neck, or ears, giving you more time to get away. (Got 10 minutes? Then you’ve got time to lose the weight for good with Prevention’s new 10-minute workouts and 10-minute meals. Get Fit in 10: Slim and Strong for Life now! )

Move #5: Choke defense
If your attacker starts to choke you, there’s a good chance you’ll immediately move your hands toward your neck. However, instead of trying to pull the attacker’s hands off of your neck—a feat you’re unlikely to succeed at, especially if you’re smaller than your attacker—use your hands like hooks (with your thumbs against your pointer fingers and hands in a “C” shape) and “pluck” at your attacker’s thumbs. (If possible, kick at the same time.) If you’re able to pluck your attacker’s thumbs away, it’ll be harder for him or her to maintain a choke, giving you time to strike back and get away. “Keep in mind you only have between 3 and 8 seconds to get your attacker’s hands off your throat before you start to lose oxygen and pass out,” says Campbell.