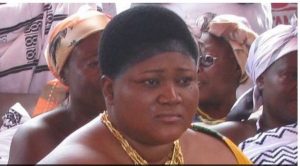 The Queen mother of Mampong in the Ashanti region, Nana Agyakoma Dufie II, has appealed to the various political parties to accept the results of the upcoming general election on December 7, irrespective of who emerges winner.

Speaking to the Graphic Online in Kumasi, the queen mother who is also a member of the National Peace Council urged all stakeholders to contribute their quota towards ensuring a peaceful election for the nation.

Nana Agyakoma urged the youth not to allow themselves to be influenced to to foment trouble and rather support any move that would ensure peace before, during and after the election.

She was very upbeat that the nation would go through the election successful without any incident and then charged the various political parties to educate their supporters to desist from any act that stand the chance of bringing conflict since any conflict would not affect members of only one party.

The queen mother appealed to the political parties to consider the interest of the people first in everything they intend doing before, during and after the election to promote peace and development of the people.

“Be careful with your utterances as we close in on the election to avoid sparking any form of conflict which could destabilize the peace and security of the nation”. She said.

She explained that with the authority and the respect accorded traditional authorities, leading the crusade for peace would be in the right direction and stand the chance of calming down nerves and tempers of people when provoked.