Africa Can Finance Its Education 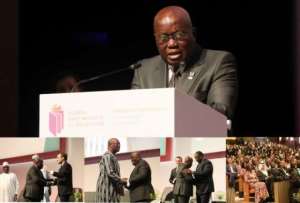 Africa cannot depend on others to finance education on the continent, when it has the wherewithal to do so, President Nana Addo Dankwa Akufo-Addo has said.

He said Africa had the resources and capacity to finance access to quality education of its citizens, and also promote the interests of the continent.

“If we make our policy dependent on other people, when their policy changes, we will suffer. But, if we make the policy for ourselves, then it means that, at all times, we will be in control of our own destiny.’

President Akufo-Addo said this at the Third International Global Partnership for Education Conference in Dakar, Senegal.

The President attended the conference, which seeks to galvanise funds for education in developing nations, at the behest of the Senegalese President Macky Sall and French leader Emmanuel Macron.

Both countries co-hosted the event.
President Akufo-Addo noted that even though Africa had enough resources to fund its development, there ought to be the elimination of corruption in public life, better arrangements for resource exploitation and the prevention of capital flight from the Continent.

‘Thabo Mbeki’s Commission that looked at the illicit flows of capital out of Africa, has estimated that for every year, in the last ten years, $50 billion goes out of Africa through illicit means. Can you imagine what those monies, if we had our eyes open, and we were not complicit in that illicit outflow, would mean for the capacity of our nations?’ he asked.

The President stated that the challenge confronting Africa was ‘how we can organise ourselves to make sure that the wealth, the huge wealth of this great continent, at least, in the first time in modern history, is used on behalf on the peoples of the continent, and not those outside.’

He was confident that ‘if we are able to close that gap, we will come here to Dakar to talk about education, and not the funding of education by others. We will be talking about the quality of our education, the changes we need to make to our curricula, and the emphasis we have to place on our history and sociology.

‘So that, I am not misunderstood, all those who have been making the pledges, it is all good. But, I think it is extremely important for us to get our whole mind set right. We have within us the capacity to develop and promote the interest of our continent ourselves. Let’s do it.’

President Akufo-Addo said it was ironic that Africa had the youngest population, and the richest continent on the planet, but had the worst living conditions, which he indicated could only be broken by education.

President Akufo-Addo told the Conference that Ghana was determined to open opportunities for everybody.

“We felt that at this stage in the history of our country, the Ghanaian State should take on that responsibility. So, as from September past, Senior High School education in the public school system has been made free,’ he said.

‘What it has done is that the figures have revered. 90,000 more students entered senior school this year than the year before. It is the first step in ensuring that the educational system in our country, from kindergarten through primary to secondary, and ultimately through University, are open for everybody.’

The President opined that quality education, with greater focus on science, technology, engineering and mathematics would prepare the young population of Africa for life in the 21st century and guarantee the future of the continent.

‘We have seen that in the development of the economies of Asia, in China, India, Japan, and Korea. That is the way forward, to be able to make the transition from poor to prosperity,’ the President added.