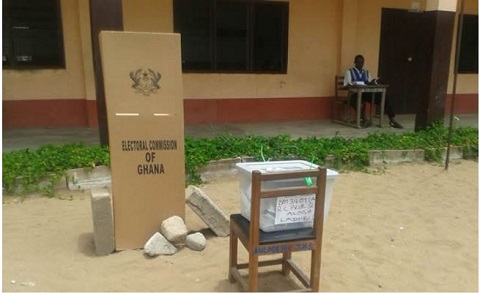 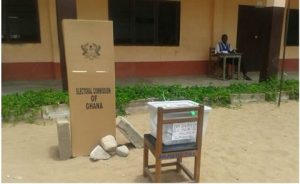 Two ballot boxes have allegedly been snatched at a polling center in Nhyiaeso Constituency in the Ashanti Region, Joy News’ election Headquarters has learned.

The two suspects were said to have driven by the SDA polling station at about 2 p.m, jumped out and snatched a ballot box each, Joy News’ Ashanti regional correspondent Ohemeng Tawiah has reported.

Their daring lawlessness was matched by even more daring voters who gave them a good chase.

Sensing danger, the two were said to have thrown away the box and split to seek refuge in different houses. But they were arrested and beaten.
The identities of the two have not been revealed but Ohemeng Tawiah described one of them as a stoutly built middle-aged man.

A scarf tied around his head was blood stained and covered a head injury, he said. The two are said to have been handed over to the South Suntreso Police who are investigating the incident.

Earlier before the incident, an eyewitness said a man in a yellow T-shirt lurked around the polling station and was heard speaking in Hausa.

Following his suspicious movements, the man also well-built was told to leave the place. But they came back moments later for a swoop on the boxes.
The Nyheiso Constituency is a stronghold of the opposition New Patriotic Party (NPP).

The party recorded 77.69 percent in the 2012 presidential election and 21.69 percent for the governing National Democratic Congress (NDC).

The two parliamentary candidates for the constituency are Kennedy K. David for the NPP and Samuel Sarpong for the NDC.