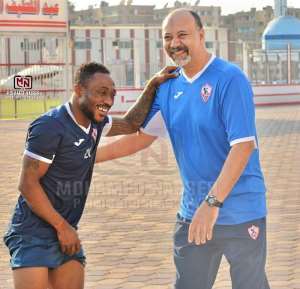 Ghanaian striker Ben Acheampong is expected to make his Egyptian Premier League bow for Zamalek ahead of the clash against Misr Lel Makasa tonight.

The 27-year-old has been included in the 18-man squad for the game at the Cairo International Stadium, the first time he will have been involved in a league fixture.

The former Asante Kotoko striker has recovered from a knee injury which has affected his involvement in the team since joining in August.

NebojÅ¡a JovoviÄ‡ has named the Ghanaian in his roster for the game on Monday evening to underline the overwhelming confidence reposed in the highly-rated striker.