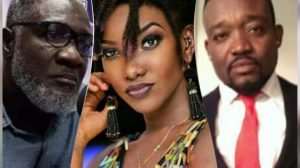 The manager of the late Ebony Reigns Bullet and her father Nana Opoku Kwarteng have buried their differences. The two are planning to hold a one year anniversary for Ebony in March, 2019.

Speaking at a press conference on Friday, Bullet said despite their rift, his relationship with Nana Kwarteng has always been ‘son and father’ type.

“He has been a father to me and I can say on authority that there are no issues between us. I didn’t know the business side of music and I’m still learning. Ebony was my first artiste. I’m sure she would be smiling wherever she is now,” he said.

On March 24, 2018, her funeral was held at the forecourt of the State House in Accra.

Ebony was travelling with three other people from Sunyani, two of whom have also died. They were her friends — Frankie Kuri and Atsu Vondee, a soldier. It was the driver of the Jeep that survived the crash.

Bullet and Mr Kwarteng were locked in a duel last year over proceeds from the Vigil Concert which was held on 23rd March, 2018 in honour of the dancehall diva.

According to him, the concert was meant to set up a foundation in the name of Ebony but Bullet was not transparent in dealing with the matter.

Bullet, unhappy by the turn of events took to Facebook, to mention all monies he had given to Ebony’s father as proceeds from other engagements and revenue from Ebony’s works.

The reconciliation was engineered by the the leadership of the Ghana Music Right Organisation (GHAMRO) and the Musicians Union of Ghana (MUSIGA).