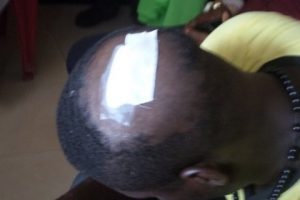 Naaba Abdulai, brother of Collins Dauda, Minister of Water Resources Works and Housing has apologized for his claim that killing people is his daily activity.

It would be recalled that Naaba Abdulai in a shocking revelation on Kumasi-based radio station Agyenkwa FM, said killing people is his daily activity thus will not spare the life of anybody who will try to thwart the effort of the National Democratic Congress (NDC) to retain power.

Naaba’s brazen comment comes after he claimed the Member of Parliament for Assin Central, Kennedy Agyapong has threatened to unleash NPP’s Invisible Forces on him on election day at Asutifi South in the Brong Ahafo Region where his brother Collins Dauda, who is also the Minister for Local Government, is the MP.

Naaba dared Kennedy Agyapong to bring it on because he together with his thugs are more than ready to meet him boot-for-boot.

He said the outspoken MP ‘is just bragging, if he dares steps here on Election Day, he’ll be arrested and beaten mercilessly. If he comes here and threatens to kill anyone, I swear we’ll finish him first’.

‘Ken Agyapong should go and teach people how to shoot in his constituency…as for us, we kill people every day. If they are ready, we are ready too. My life is dear to me, I’ll not allow anyone to threaten me’ he stressed.

Several people including members of the NPP after the comments called on the security to as a matter of urgency arrest him since his comment is seen as a distasteful one.

But Naaba in an interview on Adom News in a sudden u-turn said he was carried away by the devil and therefore his intention was not cause chaos.

He also called on Kennedy Agyapong to forgive him for accusing him wrongly and put the past behind him.

“Ghanaians should forgive me as well as Kennedy Agyapong. I don’t know what came over me to make such comments but I want you to forgive me because I have prayed to God over it to forgive me after realizing that what I said was very offensive.

“I am a farmer and not a murderer, I have not killed before and so I want Ghanaians to fogive me. I will personally go to Kennedy Agyapong and apologise to him. After all the NPP is now the inccoming government so we all have to accept it” he noted.