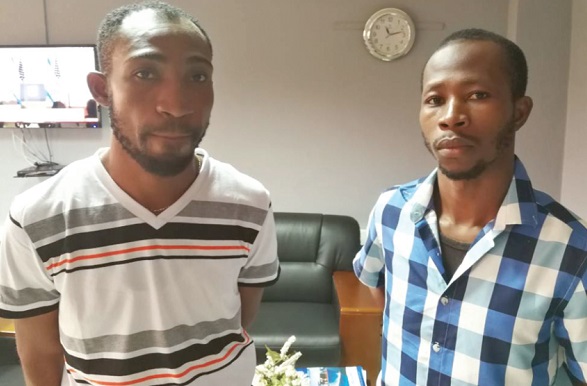 Posted By: adminon: May 26, 2017In: General NewsNo Comments
Print Email 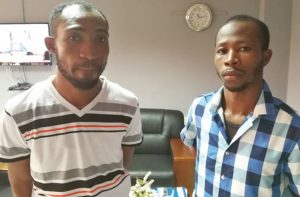 The Economic and Organised Crime Office (EOCO) has arrested two persons for allegedly attempting to traffick seven girls to Jordan in the Middle East.

Courage Boadi, a travel and tours operator, and Michael Akantoganya, a self-styled businessman, were picked up at the Kotoka International Airport (KIA) last Monday, as they were facilitating departure formalities for the victims.

The Deputy Executive Director of EOCO, Mr Walter Amewu, told journalists in Accra that the suspects were arrested with the assistance of personnel of Aviation Security and the Ghana Immigration Service (GIS).

Narrating how the suspects were arrested, he said EOCO picked up intelligence that some persons were facilitating the trafficking of girls to Jordan.

He said EOCO alerted its surveillance unit when the organisation got the victims’ schedule of travel.

Based on that, he said, the Aviation Security and the GIS were notified to be on the alert at the KIA.

He said the suspects and the victims were subsequently arrested while the girls were going through departure formalities.

Mr Amewu said the suspects and the victims had been handed over to the Anti-Human Trafficking Unit of the Criminal Investigations Department (CID) of the Ghana Police Service for further investigations.

When contacted, the Head of the Anti-Human Trafficking Unit of the CID, Superintendent Mike Baah, confirmed that the unit had taken over investigations into the case.

He said the principal suspect, Boadi, who operated Boving Travel and Tours, a travel and tours company, was allegedly engaged in an illegal business because he was using the company to operate as a private recruitment agency without licence from the Ministry of Employment and Labour Relations.

Supt Baah indicated that the police were making efforts to reunite the victims with their families.

Ghana has been on the Tier Two Watch List of the United States for the past two years because of its poor performance in the fight against human trafficking.

A third consecutive year of appearance on the list could make the US government withdraw its financial and other logistic support for the country.