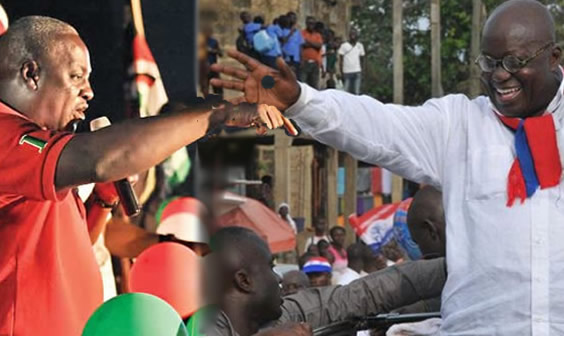 Ghana decides: Who will win, Mahama or Akufo-Addo? 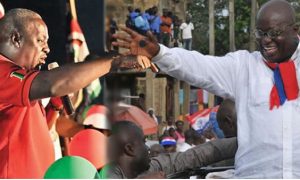 After nearly two years of strenuous political campaign and rancor, Ghanaians will today elect a new president, renewing the mandate of sitting president, John Dramani Mahama or choosing legal luminary Nana Akufo-Addo, whose campaign has centered on job creation and provision of quality education for the Ghanaian people.

The winner will inherit a restless nation, an economy that has exceeded its borrowing target for years and dependent on the benevolence of other countries and international institutions.

President Mahama enters today’s election with optimism, having been guilty of abuse of incumbency, while Akufo-Addo who once upon a time exhibited opulence and prestige in the era of former President John Agyekum Kufuor, grope to mount a sustainable campaign, after eight years in opposition.

The centerpiece of President Mahama’s final campaign swing was a mammoth rally at the Accra Sports Stadium, where he was joined by some senior government officials and businessmen who hitherto were seen by political watchers as neutrals.
“We are winning but we don’t have to be complacent.

All of us have to resist the temptation of staying home and go out in our numbers to ensure that everything is sorted out,” elated President Mahama told teeming supporters, who travelled far and near to witness the occasion, though it was said to be regional rally.

Akufo-Addo in a special broadcast Monday night urged voters to consider the future of the country as they head to the polls to elect a new leader.

He argues that the NDC administration has failed to seek the interest of the Ghanaian people.

He cited several failed promises of the NDC government in the past eight years as basis for his call – while urging Ghanaians not “to allow this opportunity slip”.

Heading into Election Day, nearly 120, 000 people had already cast ballots in the special voting, which was fraught with administrative challenges.

Out of 17 presidential candidates including an independent candidate who submitted their nomination forms to the Electoral Commission (EC), only seven candidates were able to make it on the EC’s list.

What makes today’s elections special is the fact that it is the first time a woman in the person of the former First Lady, Nana Konadu Agyeman-Rawlings is contesting in the country’s presidential election.