‘I Don’t Do Galamsey’ – Wontumi 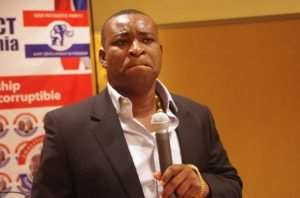 The Ashanti Regional Chairman of the governing New Patriotic Party (NPP), Bernard Antwi Boasiako, a.k.a Wontumi, has rejected claims that he has been engaging in illegal small-scale mining, popularly known as galamsey despite government’s fight to end the menace.

Traditional leaders in the Amansie Central of the Ashanti Region had accused both Mr. Wontumi and the Chief Executive Officer of Ghana Forestry Commission, Kwadwo Owusu Afriyie of being complicit in the illegal activities. .

This came to the fore during a meeting between the Chieftaincy Minister and chiefs of Amansie.

The Minority NDC in Parliament has made similar allegations against the two top functionaries.

Addressing the media on Tuesday, the Minority spokesperson on Mines and Energy, Adams Mutawakilu, accused the President of covering up the two officials.

Mutawakilu thus urged the president to immediately order the two officials to abort their operations.

“…The chief of Jakobu came out clearly [to tell me] that the CEO of the forestry commission and Wontumi, chairman of NPP in the Ashanti Region, are engaged in galamsey. It is a fact and a slap on a face of the president. I believe that the president is probably doing a cover up for this people because the information we the minority have is that the CEO of the Forestry Commission, Sir John, uses his office to put sign posts that certain areas are marked for reclamation, the natural fact is that there is serious galamsey going on in there. This is just to let the military not to invade in those places,” he said.

Mr. Wontumi in a statement however dismissed these claims, saying “the office of Chairman Wontumi wishes to state unequivocally that Mr. Antwi-Bosiako is not directly or indirectly engaged in or linked in any acts of illegal mining, neither is he engaged in any act of illegal mining in the Amansie area or in the said forest reserve, as alleged by the traditional leaders.”

“It therefore considers the allegations as very unfortunate, especially coming from no mean persons but the respected traditional leaders of Amansie traditional area. Mr. Bernard Antwi- Bosiako wishes to implore the media, the general public and all well-meaning Ghanaians to disregard the allegations and treat it with all the contempt that it deserves.”

The CEO of the Forestry Commission, Kwadwo Owusu Afriyie, also known as Sir John, has also denied the allegations and demanded evidence from his accusers.

Speaking on Eyewitness News, he said “We have not been involved in illegal mining activities.”